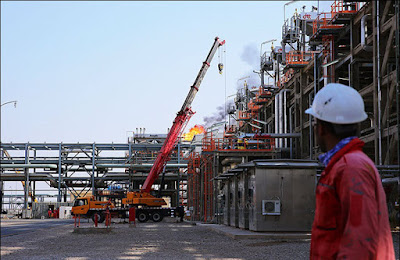 30September 2018.
By Staff Writer
While US crude inventories are growing, the price of Brent futures has remained steady at $80 a barrel and are on track for a fifth straight quarterly gain, likely due to the impending drop in Iranian regime’s exports.
At the United Nations meetings in New York, Brian Hook, US special envoy for Iran, told reporters that the US will ensure that the oil market is well supplied before it reimposes oil sanctions against the Iranian Regime on November 4.
He said: “We will ensure prior to the re-imposition of our sanctions that we have a well-supplied oil market.”
The US is doing this by ensuring that Organization of the Petroleum Exporting Countries (OPEC) are increasing supplies to reduce prices and a Nigerian oil industry official said on Wednesday that this will help balance the market after oil prices hit a four-year high, but warned that limited capacity may reduce its options.
Malam Mele Kyari, head of crude oil marketing at Nigeria’s state oil firm NNPC and the country’s OPEC representative, said: “It’s obvious that if you have high prices it’ll affect demand, so you have to do some market balance… [but] You must have the spare capacity.”
Several larger purchasers, including many Indian refiners, have indicated that they will reduce their imports of Iranian oil, but the impact on global markets is not yet clear.
The US sanctions come into place on November 4, following Donald Trump’s decision to withdraw from the 2015 nuclear deal, which lifted sanctions on the Iranian Regime in favour of restrictions on their nuclear programme, which Trump said did not go far enough.
He has pushed OPEC to increase production to ensure enough supply remains in the oil market, but OPEC and its independent producers, including Russia, met earlier this week and agreed not to boost output. However, individual countries could yet change their mind.
Goldman Sachs said in a report: “We continue to expect that the decline in Iran exports will reach 1.4 million barrels per day, and while it is occurring faster than we had previously expected, we continue to expect it to remain offset by a faster ramp-up in production from other producers.”
Trump reiterated his calls to OPEC on Tuesday at the United Nations, accusing the Iranian regime of sowing chaos in the region and promising more sanctions. These sanctions are welcomed by the Iranian people as it will limit the amount of money that the Regime has to spend on abusing its own people.