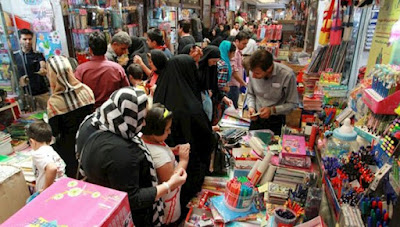 Iran, October 7, 2018 - Iranian families’ purchasing power is decreasing more and more due to the regime’s policies and economic mismanagement. Low-income families are most gravely hit by economic miseries as their wages are far behind the increasing inflation rate.
The falling rial—Iran’s national currency—against US dollars has helped to fuel the nation-wide inflation and has the most impact on low-income families.
Ilna news agency reported on October 4 that according to calculations by the Workers Group of the High Council of Work, on September 28 Iranian workers had 90 percent less purchasing power compared to March 21. That’s a 90 percent decrease in purchasing power in just 6 months.
A few weeks ago, the Wages Committee of the High Council of Work reported that the basket of goods for a workers family is 48 million rials, while the minimum wage for a worker in Iran is just 11.15 million rials. Some Iranian news agencies even report that small factories and workshops don’t even pay that much to their workers.
Isna news agency quoted Mohamadreza Rahdari, member of the board of High Assembly of Workers, as saying: “The price for some goods have increased 50 to 100 percent,” and the living situation has become difficult for some Iranian workers.
On July 30, Ilna news agency quoted Faramarz Tofiqi, chief of the Wages Committee, saying, “The worker class’ survival is in danger. The situation is beyond difficult and even beyond grave. There is no word that can describe it.”
The situation is so grave that even labor syndications that are recognized by the Islamic Republic are asking for wages above 50 million rials.
Meanwhile, the Syndicate of Workers of Tehran and Suburbs Bus Company has published a petition with two thousand signatures, asking for another increase in wages for the current Iranian year.
The 41st clause of the Iranian labor law states that the monthly wages of workers should be calculated based on the inflation rate and the monthly living costs of one family, but activists believe that the monthly clause has never been considered in calculating worker wages.
Analysts believe that in the next few months the Iranian economic downfall will accelerate, especially while its oil income decreases under US sanctions. But analysts also agree that the US oil sanctions against the Islamic Republic that are due next month have only an accelerating effect on the economic collapse. The real problem lies in economic mismanagement and wide corruption by a regime that has put the country under medieval rule for the last 40 years.