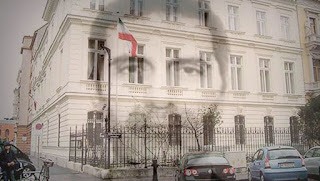 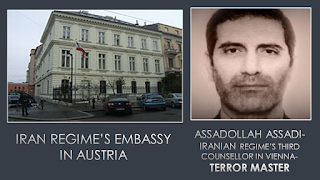 Bamberg, Oct. 1, 2018 - On Monday, the regional court of Bamberg region, Germany, declared it had approved the extradition of Assadollah Assadi, an Iranian diplomat involved in a foiled terrorist plot against Free Iran 2018, the largest annual Iranian opposition gathering
The Free Iran 2018 gathering, held on June 30, saw the attendance of tens of thousands of Iranians from across the world who support democratic regime change in their country. The event featured speeches by Mrs. Maryam Rajavi, the president-elect of the National Council of Resistance of Iran (NCRI), as well as politicians and dignitaries from different countries of the world. The rally’s guest speakers included Rudy Giuliani, lawyer and advisor to the U.S. President, Newt Gingrich, former Speaker of the U.S. House of Representatives, Stephen Harper, former Canadian Prime Minister, and Bernard Kouchner, former Foreign Minister of France.
European authorities arrested Assadi and five other people who were involved in a terrorist plot that aimed to detonate a bomb at the event. Assadi was responsible for the coordination of the attack and had personally delivered 500 grams of explosive material to an Iranian couple tasked with carrying out the attack.
In July, Belgian authorities had requested the extradition of Assadi. The Iranian regime had tried to raise diplomatic immunity as an excuse to avoid the extradition and trial of Assadi, but the German court declared "The wanted man cannot cite diplomatic immunity because he was on a several day holiday trip outside his host state Austria and not traveling between his host country and the state that dispatched him.”
Assadi was based in Vienna, Austria, since 2014, where he was responsible for coordinating the Iranian regime’s espionage and terrorist activities in Europe. He also did a stint as the third secretary in the Iranian regime’s embassy in Baghdad, Iraq, where he was actively involved in the Iranian regime’s terrorist plots against the PMOI/MEK and coalition forces.
In September, the NCRI held a conference in London, in which it warned against the Iranian regime’s escalating terrorist activities abroad, especially against members and supporters of PMOI/MEK and NCRI. In recent months, authorities in the U.S. and Europe have arrested several people linked to the Iranian regime and involved in spying and terrorist activities directed toward the Iranian opposition.
The NCRI and supporters of the Iranian opposition are demanding European countries to close down the Iranian regime’s embassies and expel its diplomats, which have a long history of carrying out terrorist activities in their host countries.