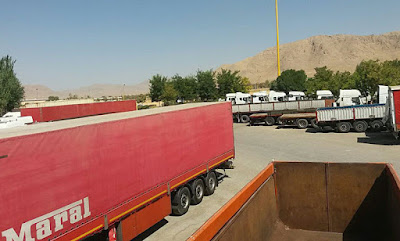 By Mahmoud Hakamian
It is more obvious than ever before that the Iranian Regime is terrified of its organised, democratic opposition, the People's Mojahedin Organization of Iran (PMOI/MEK), and its strong links to the ongoing protests and strikes by the Iranian people, which is why the mullahs are cracking down violently on the protesters.
The political deputy of Khorasan Razavi Province, northeast Iran, said that the truckers’ strike is linked to the MEK who are issuing calls on social media for more people to join the protests; although he willfully misrepresents as the MEK calling for protesters to stop the truckers from working, as opposed to calling for people to join the strike and support the truckers.
While Sadegh Amoli Larijani, head of the Iranian regime’s so-called judiciary, who is virtually the mouthpiece of Supreme Leader Ali Khamenei, also tried to defame the MEK and the truckers by accusing them of taking advantage of Iran’s current crises to call for fair wages, timely payment, and improved safety. He even accused the MEK of hiring protesters, but this is something that only the Iranian Regime does.
Mohseni Ejei, the spokesman of the regime’s judiciary, went further and issued threats against the MEK and the protesters saying that they would face severe, immediate punishments, with no tolerance shown. This was seconded by Revolutionary Guards (IRGC) Brigadier General Mohammad Sharafi and, likely, Ali al-Qasimehr, the chief justice of the Fars Province, who accused the strikers of "corruption on earth", a crime that carries the death penalty in Iran.
The truckers’ strike had spread to all four corners of the country on Monday (its 9th consecutive day), so the Regime was cracking down hard. State security forces had arrested over 120 of the protesting drivers and Iranian regime attorney general Mohammad Jafar Montazeri threatened to execute the protesters. Still the strikers continued, ignoring the Iranian Regime’s threats.
Quite bizarrely, the Fars Province Transportation Director General actually attempted to dismiss the strike as a mere rumour started by the MEK to mislead the public and make the Regime seem weak.
Still, while the Regime attempt to discredit or demean the strikers, they are supported by the Iranian Resistance.
Maryam Rajavi, President-elect of the Iranian Resistance, has applauded the drivers throughout their protest and has explained that the threats are merely the result of the mullahs feeling backed into a corner by the protests and the demands of the people.
She called on the international community and the people of Iran to support the strikers and call for the release of all imprisoned protesters.