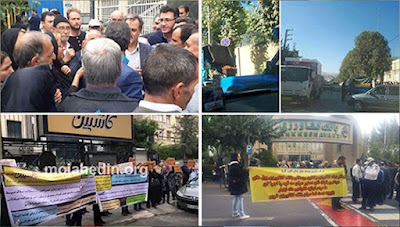 Iran, Oct. 31, 2018 - As reports of continuing protests and strikes arrive from across Iran, clients of the Caspian credit firm, associated to the regime’s Revolutionary Guards (IRGC), rallied outside this institution’s main office building in Tehran and held a protest gathering on Monday morning.
“Caspian has stolen from us, the government is supporting its measures,” the protesters were chanting.

Also on Monday, clients of the Alborz Nahal Neshan credit company protested outside the Bank Keshavarzi in Tehran, demanding their plundered life savings returned.
In Javanrud, western Iran mobile street vendors selling fruits rallied outside the mayor’s office in this city on Monday, protesting the rising price of fruits.

Farmers in Najaf Abad, Qahderijan and Fouladshahr of Isfahan Province, central Iran, began rallying again on Monday, protesting and going on strike for not receiving their share of river waters. A large banner seen at their protest site read, “What happened to our Zayanderud (a local river)?”
Farmers in the city of Shushtar, southwest Iran, also rallied on Monday, protesting not receiving answers to their rightful demands. They parked their tractors in one area in a sign of their ongoing protests.
In Abadan, southwest Iran, a group of contract employees in the Abadan oil refinery’s transportation sector held a rally demanding their delayed paychecks and pensions.

Read more:
On Saturday, various posts on official outlets and social media networks indicated numerous groups of rail workers going on strike, continuing to this day. The state-run ILNA news agency, along with other outlets, were also posting reports in this regard.
As this strike successfully began, Iran’s society is now witnessing yet another group of workers launching a strike. These rail workers are responsible for keeping the country’s rail network up and running 24 hours a day, seven days a week.
This latest series of strikes in the third round of protests launched by Iran’s rail workers in the past six months. It is worth noting that the rail workers also launched a number of more local strikes in between the periods when the entire country was experiencing strikes.
The protesting rail workers are demanding delayed paychecks, in some cases postponed for three to four months. Cities across numerous provinces, including Khorasan, Azerbaijan, Lorestan, Isfahan, Zanjan, Eslamshahr, Karaj, Shahroud, Semnan, Damghan, Gorgan, Varamin, Arak, Urmia (Orumiyeh), Andimeshk, Zahedan and the town of Diezel near Tehran were home to such protests.
On September 29, rail workers in Shahroud began demanding their delayed paychecks. Once again, on October 6, rail workers in Khorasan Province went on strike, marching towards the mayor’s and governor’s office while protesting their delayed paychecks.
Officials have repeatedly provided hollow promises saying the workers’ demands will be provided for. This has become nothing but hollow promises. These workers have also not received their wages for the past few months or any pensions during the past six years. Only 22 rail workers in Tabriz have been able to receive their pensions.
All the while, inflation is skyrocketing, necessities are becoming more expensive with each passing day, and the workers are being deprived of even their very low incomes.

Railway workers in various parts of Iran, including Hormozgan, Shahroud, Damghan, Semnan, Zagros, and Lorestan launched their third round of protests on Saturday morning, demanding their paychecks that have been delayed for the past three months.
This is yet another example of people from all walks of life protesting in cities across Iran.
These workers, numbering at around 6,500, are saying they are very steadfast and serious on this new round of protests.
Their first rally dates back to July 20th to August 8th. The second round was launched on August 25th, continuing for three days.
These protest gatherings were held in various rail networks throughout the country, including the provinces of Khorasan, Azerbaijan, Lorestan, Isfahan and Zanjan, and the cities of Eslamshahr, Karaj, Shahroud, Semnan, Damghan, Gorgan, Varamin, Arak, Urmia (Orumiyeh), Andimeshk, Zahedan and Diezel near Tehran.
On September 29th, rail workers in Sharoud went on strike and launched a protest rally after not receiving answers to their demands.
Workers of the Abnie Company are seeking permanent contracts, an independent worker union, job security and measures preventing officials from launching unbridled layoffs, being permitted to voice their protests and discuss their demands, monthly paychecks provided at specific timings and the workers’ insurance problems seen to for their ultimate resolving.
Negligence to the workers’ demands have resulted in their problems remaining unresolved over the years, and the workers continue to seek their fundamental demands.
Repair employees of Tehran’s railway have joined the general rail workers’ strike, saying they are demanding a raise according to legal regulations.
The protesting workers issued a statement saying:
“We have not received our demands and pensions at a time when we are facing an increase in prices of ordinary goods on a daily basis and we literally lack the ability to provide for our basic needs.”
The workers are demanding their paychecks being provided on time through a regular trend.
“We railway workers are among the most deprived branch of society and the wages we are from contracting companies are provided at a very minimum. In the best of circumstances, a railway worker is receiving 15 million to 17 million rials a month ($107 to $121). Most of this goes to provide for the mortgage, water, electricity, and gas. Even if we are able to pay for these expenses, it will be through extreme difficulties and even further dilemmas will come our way.”