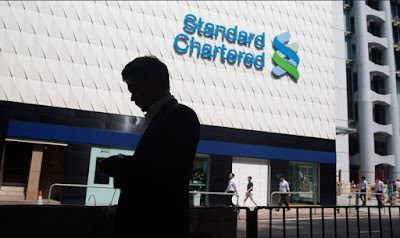 By Staff Writer
Standard Chartered Plc is potentially facing a $1.5 billion fine from US authorities for letting its customers violate Iran sanctions, according to people familiar with the matter.
The quoted figure is merely preliminary, but is based on communications between the bank and the regulators as final discussions to resolve the matter have not yet begun. The allegations relate to breaches from 2013 and before, when Iran was last under US sanctions.
The coalition of enforcement and regulatory agencies who were looking into the matter, including the Justice Department, New York’s Department of Financial Services and the Manhattan District Attorney, have finished their investigation and are expected to announce their revelations by the end of the year.
The US has been keeping an eye of Standard Chartered since 2012, when the bank entered into a deferred prosecution agreement to resolve allegations that it had facilitated business with Iranian parties. The DPA was extended by the US in 2014.
In a statement, Standard Chartered said: “As previously disclosed, we continue to cooperate fully with the investigation regarding our historical sanctions compliance, and are engaged in ongoing discussions with the U.S. authorities.”
Drop in Shares
The bank’s shares dipped a further 3.3% in value after the figure was revealed, as the fine was tripled the expectations of some analysts. So far in 2018, they’ve dropped by 21%.
The true fine amount will depend on whether the lender let Iranian-linked entities to move money through a Dubai unit and the extent to which these were shared with the relevant US authorities. The London-based bank was found to have been secretly moving billions of dollars through the US on behalf of Iranian clients, which is a clear violation of US sanctions.
As part of the DPA, the lender agreed to have its business practices scrutinized by an outside, independent monitor. The US would dismiss the charges against the bank once they complied with sanctions, but failure to comply would allow the case to be reopened. As of yet, authorities say that the bank has not complied to the required standard.
These international companies with links to Iran have come under increased scrutiny as Donald Trump has taken a hard line on Iran, which he says is a state sponsor of terrorism. Other European banks targeted by the Justice Department for doing business with Iran include BNP Paribas SA, who were fined $9 billion in 2014, and Commerzbank AG, who agreed to pay $1.45 billion in 2015.