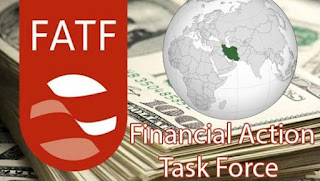 Oct. 2, 2018 - Heshmatollah Falahatpisheh, head of the Iranian regime’s Parliament’s Security Commission, said: “MPs have received messages ranging from advice to threat to not to sign FATF [bills].”
On September 30, in his mid-session address, Falahatpisheh said: “There isn’t yet anything brought up in Parliament about FATF. What exists are four bills. Two bills about amending internal laws and two bills about foreign conventions. If Iran passes these bills [into law] then the 41 excuses or advices of FATF will be solved.”
He continued: “We are seeing today that all the MPs receive various SMS messages ranging from advice to threat. Mr. Parliament speaker, when the last one of these bills, which is the bill about Iran’s membership in the International Convention for the Suppression of the Financing of Terrorism, is reviewed in Parliament, dedicate some of the time to FATF and what FATF is so that officials come and explain it. This country’s [national] Security Council [and] the Expediency Council should talk about it [so that] we come to a conclusion whether joining FATF is in our national interests or not.”
Falahatpisheh added: “Those who have hidden behind the scenes want to place the responsibility of decision making on FATF on the shoulders of the Parliament. Mr. President [Rouhani], I ask you that when reviewing FATF [in Parliament] all sides including the banks, the Expediency Discernment Council, the administration, the [National] Security Council, be present and talk about FATF. And then in the presence of the people we cast transparent votes regarding FATF so that the people know they have a caring Parliament.”

In a sign of mounting tensions about the FATF bills between different factions in the Iranian regime, after last Friday’s prayers, opponents of the bills have staged demonstrations in Tehran and some other cities.
Iranian Supreme Leader’s mouthpiece, Keyhan daily also attacked Hassan Rouhani’s administrations and wrote: “Unfortunately, the Ministry of Foreign Affairs has not a correct viewpoint about FATF. It is really strange that this official institution is paving the way to accept more commitments and execute the remaining demands of this intergovernmental institution, without having a correct knowledge about it. There is hope that the members of the tenth Parliament don’t become captive of this wrong analysis by the administration and especially the Ministry of Foreign Affairs and don’t pave the way for an increased impact of the US sanctions against the regime.”

Amid an escalating power struggle in the Iranian regime, Rouhani has been threatened again with impeachment.
Jalal Mahmoudzadeh, Iranian MP from Rouhani’s faction says: “If the administration doesn’t manage the situation fast, MPs are forced to initiate Rouhani’s impeachment.”
He added that 15 MPs have had a meeting about this issue with Rouhani’s assistants Eshaq Jahangiri and Hossein-Ali Amiri.
Meanwhile, Tasnim news agency reported on September 29 that “People in different cities invade store after store and buy items. One day they invade rice shops and stack up sacks of rice in their homes and another day it’s cooking oil, one-day toilet paper and the next day tomatoes.”