Hook: US Sanctions on Iran Are Working 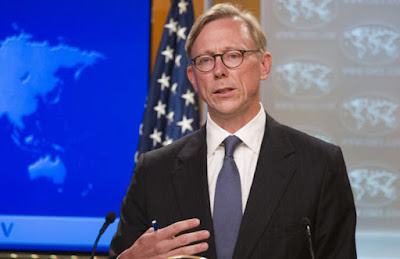 Hook: US Sanctions on Iran Are Working

London, 21 Nov - A senior US official has said that US sanctions on Iran, reimposed on November 5, have been effective and have received "almost entire compliance" from the world at large.
During an interview with VOA's Arabic-language sister network Alhurra in Dubai on Monday, Brian Hook, the US Special Representative for Iran, said: "We have seen almost entire compliance with our sanctions regime. And we don't anticipate having to sanction any major companies, because we haven't seen any evidence that these companies want to choose the Iranian market over the United States market."
The sanctions reimposed earlier this month target Iran's energy and banking sectors, as part of the Donald Trump administration’s “maximum pressure” campaign on Iran, designed to force the mullahs into returning to the negotiating table for a new deal that would address all of their malign behaviours. These new sanctions were part of Trump’s promise after he pulled the US out of the 2015 nuclear deal with Iran and five world powers in May, citing Iran’s non-compliance.
The energy sanctions mean that the US can enforce penalties on any country or company that buys Iranian oil and gas, which is Iran’s main source of revenue, although the US did give sanctions waivers to eight of Iran's biggest energy customers.
This means that China, Taiwan, India, Turkey, Japan, South Korea, Italy, and Greece, have another six months to reduce Iranian energy imports to zero; a move that the US said is intended to prevent a dramatic rise in oil prices.
Hook said: "We've been working very well with China and India, who have dramatically reduced their imports of Iranian oil. It's very important to go after the money, and for Iran, that means going after the oil revenue."
However, Iranian President Hassan Rouhani responded that the Government will "not yield to economic and psychological pressure", which is the typical rhetoric of the Government when backed into a corner.
Hook explained that the US sanctions campaign has already forced Iran to cut 1 million barrels of oil from its daily output, equivalent to $2 billion in lost revenue.
He said: "This is a regime that, since 2013, has spent $16 billion in Iraq, Syria and Yemen, supporting various militias and missile proliferation -- all sorts of threats to peace and security. Our sanctions are the toughest that have been imposed in history against Iran … as part of a campaign of maximum economic pressure so that the Iran changes its behaviour.