The US Exposes Iran-Syria-Russia Plot to Evade Sanctions 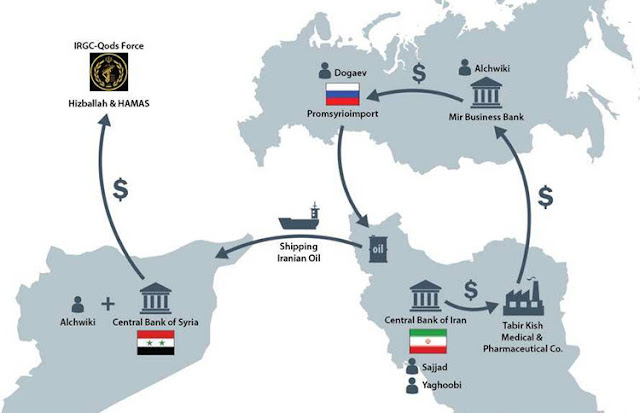 The US Exposes Iran-Syria-Russia Plot to Evade Sanctions

London, 21 Nov - The US has placed sanctions on six people and three entities involved in smuggling Iranian oil shipments to Syria to evade US sanctions, according to the Treasury Department on Tuesday.
The individuals listed include two Iranian nationals, a Russian, a Syrian, an Iraqi and a Lebanese person, while two of the entities are based in Russia and one in Iran.
US officials reported that Iranian officials had been working with Russian companies to ship "millions of barrels of oil to Syria”, something that violates recently imposed US sanctions on Iran and benefits the Bashar al-Assad Government in Syria.
Steven Mnuchin, US Treasury Secretary, said in a statement: "Today we are acting against a complex scheme Iran and Russia have used to bolster the Assad and generate funds for Iranian malign activity. The Central Bank of Iran officials continue to exploit the international financial system, and in this case, even used a company whose name suggests a trade in humanitarian goods as a tool to facilitate financial transfers supporting this oil scheme."
America, which previously dubbed Iran the “world’s leading state sponsor of terrorism”, has long accused Iran of promoting terrorism by funding militias and authoritarian rulers.
Sigal Mandelker, US Undersecretary for Terrorism and Financial Intelligence, said: "The Iranian regime continues to prioritize spending money on fomenting terror over supporting its own people. This is yet another example of Iran using the proceeds of millions of barrels of its oil to fund terrorists and the murderous Assad to the detriment of its own people.”
He explained that US will seek to impose sanctions against anyone violating US sanctions on Iran or shipping oil to Syria, which they consider to be material support to the Syrian government.
However, this is unlikely to deter Iran, who has been a major supporter of the Syrian Government since the civil war started in 2011 and who has been funding several regional proxies, such as Hezbollah and Hamas; both US-designated terrorist organisations.
The latest sanctions are part of Trump’s plan to put “maximum pressure” on Iran to address their destabilising role in the Middle East, but they are not looking to hurt the Iranian people.
On a Tuesday, a top US official said: "We very much support getting humanitarian goods to Iran, but Tehran is taking deceptive means to obfuscate sanctions."
While Secretary of State Mike Pompeo tweeted that Iran's supreme leader Ayatollah Ali Khamenei "should decide if spending the Iranian people's money on the Iranian people is more important than investing schemes to fund Assad, Hezbollah, Hamas and other terrorists."