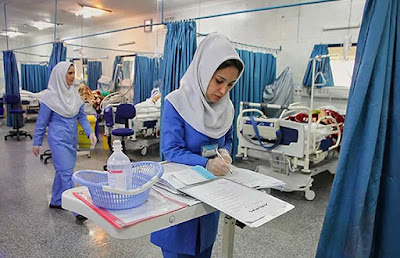 London, 20 Nov - Hospitals in Iran are currently dealing with a shortage of nearly 100,000 nurses, according to Parliament’s Health Commission Speaker Heidarali Abedi, which is having disastrous impacts on patient health.
On Sunday, Abedi told the commission that healthcare management experts recommend a nurse-to-bed ration of 2.5, but Iran’s current ratio is closer to 1.7.
He said: "There are only 89,000 nurses currently working in the country's hospitals. Therefore, Iran needs at least 95,500 extra nurses.”
Abedi, who is also an MP from Isfahan, explained that the shortage means most nurses work an average of 150 hours of overtime per year. Something that makes the problem even more prominent is that at any given time, 4,000 Iranian nurses could be on maternity leave, according to Abedi.
Worse still, these poor working conditions and insufficient pay are forcing many to leave the profession or even the country for other Middle Eastern countries or even the West.
Vice President of the Iranian Nursing Organization Mohammad Sharifi Moqddam said earlier in 2018 that around 1,000 nurses leave the country each year to pursue better pay and working conditions in Europe and North America.
He said: "Most of the Iranian nurses emigrate to Australia, Canada, the UK, The Netherlands, and Switzerland."
Another problem is the shortage of about 24,000 assistant nurses, as there needs to be one assistant nurse to every five beds, according to Abedi, who has a PhD in nursing.
He said: "It is highly unacceptable that the shortage has forced hospitals to ask the patients' friends and relatives to serve as nurses and look after their loved ones."
Many health officials agree that this shortage is negatively affecting patient care.
Abedi explains that the only way to bridge the gap is to hire 10-15 thousand new nurses each year, which could bring the nurse-to-bed ratio up to an acceptable level by 2025, although this is still seven years away.
Surprisingly though, there are still around 30,000 unemployed nurses across the country, according to Moqaddam. He told a local website in October that the low pay, excessive hours, and dreadful work conditions were driving even experienced nurses to seek a new profession or give up working altogether.
Iranian nurses have repeatedly gone on strike to protest their work conditions and are especially displeased with the implementation of the third phase of a governmental plan called “Health Development”, which increased physicians' pay by three-fold and offered no significant increase in nurses’ pay.