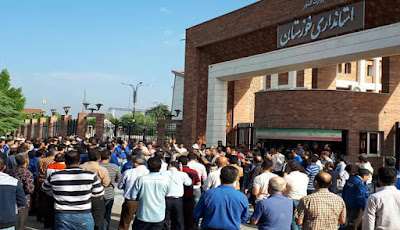 Iran, Nov. 28, 2018 - Employees of the National Steel Group in Ahvaz, capital of Khuzestan Province of southwest Iran, continued their strike and protests on Wednesday, marking the 19thconsecutive day. This gathering was held outside the Khuzestan Province governor’s office. These workers are seeking their delayed paychecks and are protesting corrupt policies practiced by regime-linked company owners.
The workers were holding up signs with the slogans:
“Workers are aware and they abhor exploitation”

Also in Ahvaz, a group of retirees from the Ahvaz Medical School rallied outside the Khuzestan governor’s office and joined the National Steel Group employees’ ranks.
The steelworkers were chanting the following slogans in their demonstration today:
“No to living in shame”
“Workers would rather die than live in shame”
“We will uproot cruelty”

Chants:
"Down with oppressors, hail to workers" pic.twitter.com/AMFTUZim0n

During Tuesday’s rally, one of the steelworkers made strong remarks against regime officials.
“I have people working for me… Mark my works, the officials are mistaken thinking they can break our ranks… We can’t be bought… We won’t leave the streets until we expose every single one of you. We won’t back down from our demands until we break the mafia’s hands.”

Tuesday’s rally also began outside of the governor’s office and from there the workers headed towards the city’s Naderi Bridge, marching towards Taleghani Square and then heading to Naderi Avenue. A number of brave women were seen joining the protesting steelworker's lines during their march.
These demonstrations are held in circumstances where members of the regime’s anti-riot units are stationed near the mayor’s office and prepared to crackdown the workers’ protests.

Read more:
Employees of the National Steel Group in Ahvaz, southwest Iran, continued their strike and protests for the 18th consecutive day, demanding delayed paychecks and protesting corrupt practices by regime officials in regards to their company.
The workers were chanting a variety of slogans including: “We steelworkers stand against oppression & cruelty”

Chants:
"We will uproot cruelty"
"No to living in shame"
"Government, mafia - congratulations on your matrimony"#IranProtestspic.twitter.com/o4iqxdBHDV

The strong words of support from a woman who felt the workers’ pains compelled the protesting steelworkers to show their respect.

"The bankrupt government is sitting on our money"
"Neither judges, nor the government, none think of the people"#IranProtestspic.twitter.com/E0iXwwTRj9

These workers have not been paid for at least four months and are protesting officials’ measures of handing over the company to regime-linked figures to plunder the company and the workers for their own interests, all under the pretext of privatization.