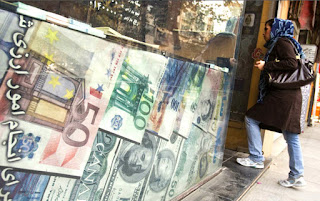 on 21 November 2018.
By Shahriar Kia
If you have any doubt that US sanctions on the Iranian regime will achieve the objectives that Donald Trump wants, then you should think again. While the immediate impact of the latest sanctions, targeting Iran’s oil and gas industry amongst other things, is likely to be minimal, the longer-term effects could be significant. Some are even predicting that they could make it nearly impossible for the Iranian Regime to sustain its current oil production.
On November 4, the US reimposed bans on Iran regime’s oil exports, something that Trump had vowed to do after withdrawing from the Iran nuclear deal in May. This 2015 agreement between Iran and six world powers, including the US, agreed to lift international sanctions on the Regime in exchange for limitations on Iran's nuclear development program; something that Trump said never came to pass.
Some were sceptical about how much good sanctions would end up doing, especially after the US gave sanctions waivers to eight of Iran's largest energy customers, including China, India, South Korea, Japan, and Turkey.
Some have even speculated that a drop in Iran’s oil volume could increase the price of oil, which might mean that Iran’s oil revenues remain steady. Thankfully, the US push for other countries to increase their oil production will tamper this in time.
Others cited that the European Union and other signatories to the Iran deal have agreed to stay committed to the deal, with the possibility of a “special purpose vehicle” to bypass US sanctions, which would effectively render sanctions all but useless.
However, the SPV has major problems from the start, not least that no one is willing to host the headquarters and that it would still violate US sanctions. Many European companies have already seen the light and pulled out of Iran, including Danish conglomerate A.P. Moller-Maersk and French energy giant Total.
Even if Iran can deal with the sanctions currently, it paints a completely different picture down the road, especially when the oil fields’ production falls off, especially due to the wasteful recovery techniques used, and Iran lacks the investment to develop more. So eventually Iran's energy sector will become less tenable.
In fact, Iran already uses just over 50% on their natural gas production domestically, for their household, commercial, and small industries sectors, and consumption there is only rising. While another 14% goes to the production of petrochemical products to export, like ethylene and propylene, which are the building blocks for manufacturing plastics, fibres, and other chemicals, and make up a large proportion of Iran’s non-oil exports to China.
This will soon mean that the Iranian Regime is forced to choose between exporting energy and quite literally keeping the lights on at home.