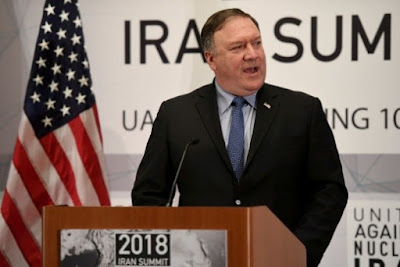 Iran’s regime could fall apart. What happens then?

Secretary of State Mike Pompeo speaks during the United Against Nuclear Iran Summit on the sidelines of the U.N. General Assembly in New York on Sept. 25. (Darren Ornitz/Reuters)
By Anne Applebaum
Columnist
November 23, 2018 at 3:13 PM
We are now more than two weeks into a new sanctions regime on Iran, and it will be a long time before it ends. The secretary of state, Mike Pompeo, has listed 12 conditions that Iran needs to meet before that happens. They include a permanent cessation of Iranian support for revolutionary groups abroad, as well as a permanent halt to Iran’s nuclear program. By its own definition, the Islamic Republic of Iran is a revolutionary regime dedicated to exporting its form of radical Islam; it’s also a theocracy that relies on nationalist sentiment to maintain its support. In other words, these conditions are not going to be met anytime soon.
Instead of conceding, the Iranian leadership has buckled down and prepared itself for another hit to the already weak economy. Difficult times are indeed coming. Already, companies are shutting down. Unemployment is rising. Raw-materials prices are rising. Some think the government is strong enough to survive, particularly because trade with China, India and Russia will continue. But some in the Trump administration don’t really hide their hopes that the regime will fall apart.
They might be right. The anarchic, leaderless protests — women removing their headscarves, truckers going on strike— of the past six months could spread. Nearly a year ago, protests against high prices and corruption, and in favor of a secular state, erupted in dozens of cities. Iran had a revolution before, and it could happen again. But then what?
No one is asking — and, as far as I can tell, no one is thinking about it at all. The United States now has a policy that promotes regime collapse in all but name; at the very least, it’s clear that this administration wants the Islamic republic to fail. But although we have a lively debate about the merits of sanctions, nobody seems to do much thinking about the future of Iran itself.
Nor does this administration seem to be thinking too much about Iranians — which isn’t surprising, because Americans never have. In 2009, the Obama administration could have put a human rights campaign at the heart of its Iran policy, promoting the people, ideas, education and media that could have helped change Iran from within. In 2019, the Trump administration could do the same. But the former didn’t, and the latter won’t.
At a similar stage in the deterioration of the Soviet empire, the United States, together with Western Europe, did have a policy toward what we used to call the “captive nations.” We educated the Central European economists who later led their countries away from central planning. We ran successful and popular radio programs that reached into the farthest corners of the U.S.S.R. We thought hard not just about deterring Soviet aggression but also about reaching ordinary Russians. None of it looked like much at the time, but when the regime finally did collapse, it turned out to matter.
In the case of Iran, anything even resembling a regime failure could have catastrophic consequences. Iran’s economy is dominated by companies that are owned, openly or otherwise, by the radical Revolutionary Guard Corps. Most banks are owned directly by the state. The judicial system is dominated by clerics. And the educational system has also been twisted by decades of radical religious ideology. At the same time, it is true that there are important pockets of liberalism and a vibrant human rights movement, both inside and outside the country. But the West — governments, charities, nongovernmental organizations, media — does little to assist them, to speak to them, to help them to win their arguments. Most of the time, we forget they exist at all.


If we want that “other” Iran to succeed, an Iran with a different vision of its place in the world, we should be thinking about it, planning for it, preparing for it now. If our interest in Iran reaches only to the promotion of failure, then we deserve the chaos that could ensue if we get our wish.