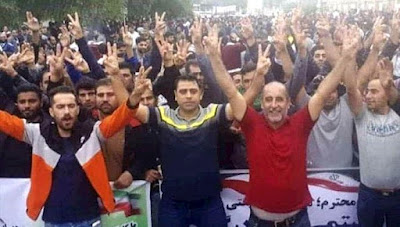 Iran, Nov. 25, 2018 - [Update at 1130 CET] On Sunday, the workers of Haft Tapeh sugar mill gathered again in front of the mayor’s office in Shush, Khuzestan, to protests against unpaid wages, the imprisonment of their colleagues and the mismanagement of the factory by private owners. This is the 21st day of the workers’ strike and the 13th consecutive day of demonstrations.
Haft Tapeh is Iran’s largest sugar factory. The workers began their protests earlier this month, demanding the payment of salaries that haven’t been paid for several months. They are also demanding the removal of private owners of the company who have pushed the factory toward bankruptcy.

21st day of protests by workers of Haft Tapeh

In response, the Iranian regime dispatched security forces and arrested several of the protesters. But the workers continued their demonstrations nonetheless and eventually forced the regime to release most of the detained protesters. The workers are saying they will continue their protests until all their demands are met.

The workers also called out the names of the private owners and called for their ouster. They also criticized the government for its widespread corruption. “This poor country has no good official,” the workers were chanting. Their slogans also included, “Death to oppressors, hail the workers.”

21st day of protests by Haft Tapeh workers. Protesters demand the release of their detained colleagues

As the workers of Haft Tapeh have persisted on their demands, they have earned the support of different communities from across Iran. In recent days, political prisoners from different prisoners in Iran have sent messages of solidarity to the workers of Haft Tapeh. Truck drivers, teachers, students, and workers from other parts of Iran have also held gatherings and shown their support for Haft Tapeh in their own unique ways.
The workers of Haft Tapeh also enjoy wide support from the people of Shush. During their protests, many of the city’s citizens joined them in their march. Merchants closed down their shops and joined the demonstrations. Students and teachers accompanied them in their march. Taxi drivers gave them free rides. Children and families helped prepare lunch for the demonstrators.

The spirit of solidarity has caused much fear for Iranian regime officials. In past months, similar protests have quickly turned into anti-government demonstrations that call for the overthrow of the ruling regime.

Update 9:00am local time: In a show of support, the citizens and children of Shush distributed pastries among the protesting workers of Haft Tapeh.