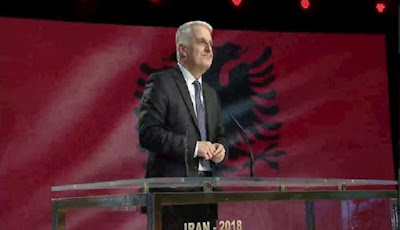 “Albania is MEK’s castle”, said Pandeli Majko
Albania, Dec. 15, 2018 – On Saturday, a conference simultaneously held by Iranians in 40 different locations in three continents across the world called for international action against the increasingly hostile terrorist activities of the Iranian regime and its egregious human rights abuses at home.
Titled “Halt mullahs’ regime growing human rights violations and export of terrorism,” the conference featured speeches by Iranian opposition leader Maryam Rajavi, political dignitaries from several countries especially Albania.
Mr. Pandeli Majko, former Prime Minister of Albania participated in  at Ashraf 3, Albania, and gave speeches.
He said: It is a great honor like every time that I have taken the floor in front of you. Not like a minister or former prime minister but first of all like a friend of yours. And I know,  Mr. Patrick Kennedy spoke before, yes, it’s a kind of question. Albania has an embassy of official Tehran in and at the same time we have you. Why both? It’s a simple and a very honest question, my answer is that yes we have been with Embassy or official Tehran from yours and they are here because of international law, but you are here because you have a difference. The embassy of Iran represents a country of today, MEK represents the Iran of the future. I’m so proud that together with a lot of friends of mine billions we are in the hands of Madame Rajavi. One of the few women that with her leadership want to change not only the future of Iran but the future of the Middle East.
I know, that exists a lot of news that MEK is terrorist, MEK has done this, MEK has done that, I have a short answer; we don’t care, because we know you, because you have come here under the umbrella of United Nation and UNHCR. UN and UNHCR and terrorism are 2 different things. UN don’t have diplomats that use the status of diplomats for acting like terrorists, some diplomats of official Iran have done this, and to say and to speak against terrorism and to act like a terrorist are a contradiction, that is not up to me or to Albania to get the solution, it’s up to official Tehran to offer a full explanation.
Things have change and time will change soon, it sure is sure that this time with this coming to a melody of a piano here in Tirana can be sung like sing in all Iran, like a song of the freedom.
Albania is MEK’s castle
And believe me when I stay in front of you I feel myself formal like official, like a representative of a government but in the same time it’s very difficult because I know you very well-known and I’m sure that each one, you and your families everywhere understand that you are not only refuges of some years ago you are in your land, here you have a land, you, have done for less than one year or a miracle you have constructed a city, and like we Albanian have all the expression, My home is my castle, Albania is your castle.