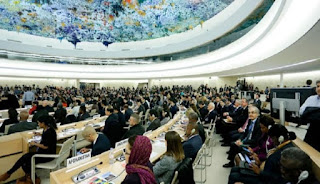 As the highest international authority, the UNGA condemned Iran’s violation of human rights. Iran’s condemnation resolution was adopted on Monday, Dec. 17, 2018.
84 states voted in favor of this resolution which draws reactions at the highest political and diplomatic levels, as well as regime’s frantic reaction.
Iran’s condemnation resolution condemns the systematic violations of human rights and fundamental freedoms by the regime and the alarmingly high number of executions, as well as torture and cruel treatment in prisons.
Iran’s condemnation resolution strongly calls for a halt to deliberate deprivation of prisoners from access to medical treatment and calls for an end to “widespread restrictions on the right to freedom of opinion and expression and the right to freedom of assembly”. It also calls on the regime to stop the “harassment and intimidation” of political opponents, human rights defenders, defenders of the rights of minorities, women, workers, students, and environmental activists. It necessitates the UN special rapporteur to visit Iran.  The resolution restated: “The General Assembly decides to continue to review the human rights situation in Iran.”
On Saturday, Dec. 15, two days before the adoption of Iran’s condemnation resolution, Mrs. Maryam Rajvavi, the president-elect of the National Council of Resistance of Iran has emphasized on the need to refer Iran’s violation of human rights dossier to the UNSC. Speaking at a global video conference in communion with more than 40 cities from Europe, North America, and Australia, she underscored: “The dossier of the regime’s continuing crimes against humanity must be referred to the UN Security Council, and Khamenei, Rouhani and other regime leaders must face justice.”
Mrs. Maryam Rajavi welcomed the adoption of Iran’s condemnation resolution and said: “the adoption of this resolution “once again confirmed that the regime blatantly tramples upon the Iranian people’s most fundamental rights in all political, social and economic spheres.”
She also reiterated: “Although the resolution fails to address many aspects of the inhumane crimes committed by Iran’s religious fascism, it leaves no doubt that this regime is the most brutal and aggressive violator of human rights in today’s world. The inaction of the international community against the crimes of this regime has emboldened it to continue and spread these crimes, the latest example of which has been the barbaric raids on the residences of the Steelworkers of Ahvaz and the arrest of dozens of those who demand their minimum rights.”

The regime has been condemned at UNGA for more than 64 times up to now. But this most recent one is quite different. Previous resolutions were adopted under the shadow of the appeasement policy which served as a major political buffer for the regime.  The political impacts of such resolutions were always neutralized. But now the appeasement policy has been defeated and the regime is not shielded.
Therefore, as Mrs. Rajavi has mentioned: “The most vivid example of grave violations of human rights in Iran is the 1988 massacre of political prisoners perpetrated by the regime’s key institutions and leaders, who are still in power, still defend this crime, and remain immune from punishment. The world community faces a monumental test in investigating and prosecuting those responsible for this great crime against humanity.”