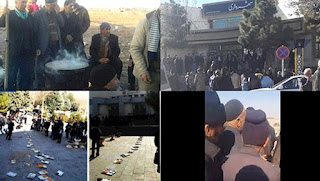 Iran, Dec. 27, 2018 - On Wednesday, the farmers of Khoursagan, Isfahan province, gathered in the city's fresh fruits market and held a demonstration in protest to the government neglecting their demands to restore their rights to water.
Addressing a government cleric who was at the scene of the demonstrations, one of the protesters said, “Where is your Islam? Where is the justice of Ali [first Imam of Shiite Muslims]? I’m ill. My wife is sick at home. Who do I have to go to and tell them that my wife needs to see a doctor? The medics committee tells me to go see the agriculture authorities. Where are they? I haven’t begged to anyone in my life. My life is becoming harsher. What happened to Islamic aid? Where is Islam? Is this how Ali ruled? In Ali’s rule, justice was with the people. Why are they [the regime] doing this to us? Why are they oppressing us?”

Also on Wednesday, the farmers of Varzaneh, eastern Isfahan, resumed their protests for the restoration of their access to the waters of the Zayandeh Rud river, the principal source of irrigation water in the province. The farmers attended the demonstration with their families and children.
The farmers were chanting: “Shame on the government,” “Hail the farmers, death to tyrants,” “Rouhani, you liar, what happened to Zayandeh Rud.”
In the past years, water projects by the government have had a detrimental effect on the water sources of the province and have cut off the access of farmers to vital water to irrigate their lands. Farming is the main occupation of the inhabitants of Isfahan and without proper access to water, the livelihoods of the farmers and their families are severely threatened. The Revolutionary Guards, which runs several construction and manufacturing projects in neighboring provinces, has had a very active role in diverting water streams for its own purposes.
Hassan Rouhani, the Iranian regime’s president, promised to address the concerns of the farmers of Isfahan regarding their water problems. But those promises have yet to materialize. Consequently, the farmers, who have seen the government’s incompetence and unwillingness to address their problems, hold the regime in its entirety to account for their problems. In recent months, the protests by the farmers of Isfahan have become increasingly focused toward targeting the regime’s role in causing problems for the province’s agricultural activities.

Protests by farmers of Varzaneh, Isfahan

Urmia students hold demonstrations in front of the university cafeteria

On Wednesday, the students of Urmia University gathered in front of the university’s cafeteria and held a demonstration in protest to government officials’ incompetence and lack of response to their demands. The students lay their food trays on the ground in protest.

Protests by students of Urmia University

The second day of protests by industrial agriculture workers of Moghan

The workers of the agricultural complex of Parsabad-e Moghan, Ardebil province, gathered for the second consecutive day of their demonstrations on Wednesday. The workers are protesting against the privatization of the company and the presence of new managers of the factory.
Two days ago, the families of Moghan had demonstrated in front of the houses of the managers of the company.
The factory is the main source of income for a large number of the inhabitants of the city, and the lives of these people depend on the factory. The protesters are concerned about the transfer of the company to a new person, who is also the owner of Iran’s Shirin Assal company, one of the country’s largest manufacturers of packaged food items.
Other companies that have undergone privatization have caused bankruptcy, corruption, and practices that have worked to the detriment of the workers. The private owners are usually linked to regime officials and use their unchecked power to make profits at the expense of the livelihoods of the workers. One stark example is the Haft Tapeh sugarcane factory in Khuzestan province, where the private owners have deprived the workers of their most basic rights. The workers of Moghan’s agriculture factory are worried that a similar fate awaits them. That’s why they’re protesting.