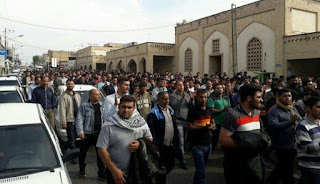 Steelworkers’ protest in the city of Ahvaz entered its 38th consecutive day On Monday, Dec. 17. On that day, the protest faced a new round of crackdown by the Iran regime’s security forces. Mass arrests took place overnight. The raids targeted the homes of Iranian National Steel Industries Group (INSIG) workers. They were carried out in absence of warrants, as in cases of politically motivated arrests. Dozens of workers were arrested and many spent nights out of their homes to avoid arrest.
Once again, in the early hours of Tuesday, security forces raided several homes and arrested 10 more. According to the observers, at least 41 individuals were arrested at their homes or in the streets for participating in the steelworkers’ protest, demanding their legitimate rights.
The suppressive security forces transferred the arrested workers to Ahvaz’s Sheyban Prison. The General Assembly of the Ahvaz Steel Workers announced that they would not engage in any negotiations with the regime’s authorities until all the workers were released.
These arrests have been the largest of their kind since the steelworkers’ protest began. The workers demanded their overdue wages, improvement of work conditions and their basic right for forming workers councils.
Despite the cruel attacks, the regime could not quell the protest. On the contrary, the protest continued the next day and workers chanted: “Imprisoned workers must be freed.” The demonstration took place in spite of the heavy presence of the security forces attempting to create an atmosphere of intimidation. The workers released a statement in which they declared, “The crime of these workers was crying out for justice, for condemning the mafia and not giving in to disgrace.” The workers use “Mafia” as a metaphor to describe the corrupted government officials who have pushed the factory toward bankruptcy, and the lives of the workers into misery. “We warn you to immediately release our detained colleagues and end this injustice,” the workers stated.
This latest wave of arrests provoked tremendous support for the detained steelworkers and their demands. Other workers, students and teachers across Iran as well as international unions lend their support.
Workers from different parts of Iran, including Tehran Bus Drivers Syndicate and truck drivers in various parts of Iran, expressed their solidarity with Ahvaz steelworkers’ protest and called for the immediate release of the detainees.
Demonstrators across Iran expressed their support for the jailed workers and called for their freedom. Hundreds of pensioners protesting outside the regime’s parliament in Tehran voiced their support for the steelworkers’ protest in Ahvaz on Tuesday morning. The protesters chanted: “From Ahvaz to Tehran, workers are in jails”, “Free the steelworkers”, “Imprisoned workers must be freed”, “Imprisoned teachers must be freed”, “Government engages in crimes, parliament supports it”, “The enemy is here, they lie to us that it’s America”.
On Wednesday, during their rallies in the cities of Isfahan and Yazd, the retired educators chanted slogans demanding freedom of the detained steelworkers.
The Industrial Workers of the World (IWW), a global union, published a statement in support of the striking workers in Iran, which reads in part, “We further redouble our call to all labor organizations to condemn trampling of the workers’ basic rights and to demand the ruling dictatorship in Iran release all detained workers, to respect the basic rights of workers and to adhere to all international labor laws…We demand the quick and unconditional release of all workers and truck drivers who were arrested during strikes.”
In a statement issued on Dec. 18, the National Council of Resistance of Iran (NCRI) condemned the callous arrests of worker protesters and called on workers, students and youths to rise in their support and protest their arrests.
Mrs. Maryam Rajavi, the president-elect of the Iranian resistance tweeted, “I call on the nation, all workers, youths and students, to back the striking workers and protest against their arrests. The secret to victory is stepping up and expanding your uprisings with the resistance units who lead the way.”
Reports indicate that about 80 percent of the country’s entire population has been consigned to poverty as a result of 40 years of governmental mismanagement and corruption. Indeed, there is no solution to the plights of the Iranian people, but ousting the clerical regime on its entirety.