The Iranian regime has virtually collapsed 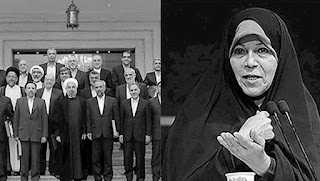 The Iranian regime has virtually collapsed

Iran, Dec.28, 2018 - In an interview with Mostaghel, a state-run news outlet, Faezeh Rafsanjani, the daughter of former Iranian regime president Ali Akbar Hashemi Rafsanjani, stressed that the regime has collapsed in all but its outward appearance.
“In my opinion, the collapse has already happened in content. It’s only in physical appearance that the collapse has not happened, and I deem it very probable that it will happen,” said Rafsanjani, who is also a former member of the Iranian regime’s parliament.
Rafsanjani also admitted that despite the high tension between the people and the regime and the ongoing protests of all walks of life in Iran, the regime has only responded by arresting and imprisoning the protesters. “Presently, if you look at any domain, some of the activists of that domain are in prison, including workers, teachers, truck drivers, women’s rights activists and environmental activists, students, and economic activists,” Rafsanjani said. “But in content, the collapse has already happened because wherever you look, the system is not working.”
“Wherever you look, you can see mismanagement. Everything has been abandoned, and no one is thinking for a solution to the problems. And where there are efforts to solve problems, they only worsen the problems,” Rafsanjani said.
Rafsanjani’s comments come at a time where protests against economic grievances are happening across Iran. In Khuzestan, the workers of Ahvaz Steel Company and Haft Tapeh sugarcane company recently held weeks-long strikes and protests against deteriorating working conditions and unpaid wages. Truck drivers have gone on five rounds of strikes for similar reasons. Teachers, students, merchants, and various other communities are regularly protesting to the regime’s incompetence in solving the most basic problems of the country.
Meanwhile, the regime’ has failed to respond to the demands of the protesters and in most cases, it has proceeded with cracking down on demonstrators and arresting protesters to temporarily maintain control on the situation. But as the people of Iran are saying, they only have their problems to lose, and the repressive measures of the regime are proving to be increasingly ineffective against the rising waves of protests across Iran.
“We have a glamorous appearance and an undeveloped and sub-third world infrastructure. This is not a good sign,” warned Rafsanjani.