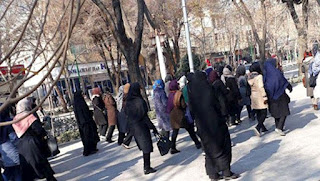 Iran, Dec. 29, 2018 - On Thursday, teachers and education workers of Isfahan demonstrated in front of the education ministry headquarters. The demonstration took place in spite of efforts by the security and intelligence agents of the Iranian regime to dissuade the teachers by threatening to take severe actions against them.
Since early in the morning, security forces lined up in the streets surrounding the offices of the education ministry to prevent the protests from taking place.
However, the teachers did not back down and started their demonstration in Davazeh Dolat Street in front of the mayor’s office. Security forces attacked them with batons and pepper spray. Clashes ensued and the demonstrations continued, and security forces arrested several protesters.
Subsequently, groups of teachers gathered in front of the education ministry offices. Security forces attacked them and violently dragged several of them into their cars and took them away. Several others were forced into a clinic that was close to the location that the demonstration was taking place. A security police officer threatened the teachers.
The teachers of Isfahan have been protesting against low wages and are demanding the release of their imprisoned colleagues. The situation in other parts of Iran is similar. In the past months, teachers across Iran have gone on strike at least twice. However, the Iranian regime has yet to take the smallest step toward fulfilling their demands. In the past months, the Iranian regime has arrested at least 100 teachers and sentenced them to prison and corporal punishment.
According to reports, the repressive forces of the Iranian regime showed no pity to the demonstrators and brutally attacked them. But the teachers continued to resist the security forces and chant slogans.
The Iranian regime had also dispatched plainclothes agents in different parts of the city to identify the teachers and people who were actively participating in the protests.
Mrs. Maryam Rajavi, the president-elect of the National Council of Resistance of Iran, hailed the teachers of Isfahan and urged their compatriots to support them in their protests.

Maryam Rajavi ✔@Maryam_Rajavi
Hail to the brave educators and teachers of Isfahan who continued their protest despite threats, attacks, use of tear gas and the arrests of dozens. I urge Isfahan’s youth to support their teachers. #Iran#FreeIran#IranProtests
374
1:38 PM - Dec 27, 2018
Twitter Ads info and privacy