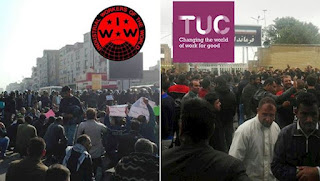 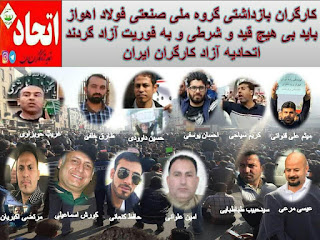 Iran, Dec. 22, 2018 - The Trade Union Congress (TUC), one of the largest labor unions in England and Wales with 5.6 million members, issued a statement condemning the Iranian regime’s ongoing crackdown of workers, college students and other protesters across Iran. The TUC also expressed its solidarity with employees of the National Steel Group in Ahvaz and Haft Tapehsugarcane mill in Shush, both in Khuzestan province of southwest Iran. The TUC condemned the raids by security forces into the homes of many protesting steelworkers across Ahvaz and their arrests, emphasizing the apprehended workers must be immediately released.
The statement reads:
The TUC denounces the actions of the Iranian government and their continuing campaign of oppression against trade unionists, students, and activists across Iran.
The TUC expresses deep solidarity with the workers of INSIG Ahvaz and the Haft Tappeh Sugarcane Complex in the campaign for the realization of their just and legitimate demands.
We support the nearly six-week-long strike of steelworkers in Iran, protesting against the failure of their employers to pay them for months at a time.
Workers at the Iran National Steel Industry Group (INSIG) factory in Ahvaz have been in dispute for over a year now with their private sector owners who have failed to fulfill their obligations to run the plant in Ahvaz at full capacity. Workers have been demanding the plant’s return to the public sector and strategic investment in order to ensure that it is profitable and sustainable.
The response of the Iranian authorities to the escalating industrial action and protests has been typically brutal. In the early hours of Monday 17th December, the security forces raided the homes of many of the strikers and arrested 31 of their leading representatives. A further ten strikers were detained in the hours that followed.
Consequently, the strikers have refused to meet with the governor of Khuzestan province and have announced that until all of the arrested workers are released, they will not enter into any negotiation.
The demands of the workers at INSIG Ahvaz and at the Haft Tappeh Sugarcane Complex, to reverse the tide of privatisation and implement the workforce demand for labour control of production, is backed by a large number of trade unions, workers organisations and social and political organisations, and is garnering ever-increasing support in wider Iranian society.

The TUC calls on the Iranian authorities to immediately fulfill the following demands:
The TUC, alongside the global trade union movement, is watching closely!

The Industrial Workers of the World (IWW) issued a similar statement voicing its support and emphasizing its stance alongside Iran’s oppressed workers.
The statement reads:
The IWW recently published a statement in support of striking workers in Iran, and has received the below disturbing update from the Association in Defence of Freedom in Iran (ADIF):
Authorities raided the homes of dozens of protesting National Steel Group workers in the midnight hours of Monday local time, reports indicate.
This raid continued until 2 am and resulted in the arrest of many workers. The raid was carried out without any arrest warrant, and the arrested workers were transferred to an unknown location.
Workers of steel factory rallied for the 38th day in protest about their unpaid wages & demanding the release of detained workers. Many of these workers had to be taken to the streets of Ahwaz through the night to prevent more arrests.
The names of 11 workers who have been arrested so far are as follow:
Reportedly, the special security unit along with the chief of the Security Forces of Ahwaz entered the Iran National Steel Group and threatened to arrest the workers on the morning of Dec 17. Despite this brutal attack, the workers of the National Industrial Steel Group are determined to hold a protest rally today.
We ask you to condemn these inhuman acts against Iranian workers and urge you to take an urgent position by requesting the UN, The UN Human Rights Commissioner, The ILO President, and all of the other Workers’ Unions to condemn this inhuman measure and to take urgent action for the release of these workers.
The IWW stands in solidarity with workers everywhere fighting for a better deal and wholeheartedly condemns these actions by the Iranian authorities.  We further redouble our call to all labor organizations to condemn trampling of the workers’ basic rights and to demand the ruling dictatorship in Iran release all detained workers, to respect the basic rights of workers and to adhere to all international labor laws.
We demand the quick and unconditional release of all workers and truck drivers who were arrested during strikes.
We express our support for the demands of the workers, drivers and the working people of Iran and urge all labor unions to assist their colleagues in Iran and to support their rightful demands, however they can.