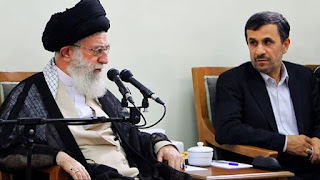 By INU Staff
INU- Former President Mahmoud Ahmadinejad called the heads of all three branches of government a “gang,” in his most recent letter to the Islamic Republic's Supreme Leader. He also accuses them of abusing their power to imprison his allies.
The pro-Ahmadinejad website, Dolat-e Bahar (the Government of the Spring), published the letter on January 21st, after it was sent to Khamenei on December 18th.
Ahmadinejad alleges in the letter, that the Speaker of Parliament and the head of the judiciary — the Larijani brothers, Ali and Sadeq — have joined forces with President Rouhani to attack the former president’s supporters. He also calls them responsible for the recent unrest and protests.
Referring to a verdict against his close ally and former chief of staff Esfandiar Rahim Mashaei, he claimed that it was upheld by the appeals court, “despite faults in the prosecution’s case,” and without respect for legal procedures. He criticized the verdict, saying it proves the court’s loyalty to Rouhani.
Ahmadinejad addressed the heads of the three branches of power and their supporters, asking, “Is there any better way to tackle the current challenges than deferring to the popular vote and holding new elections? Or perhaps they believe that they should remain in power at any cost and the people and the country should endure them until their terms are over?”
Ahmadinejad warned that “public dissatisfaction with the regime’s performance is serious and extremely high” in previous letters to the Supreme Leader. He also urged Khamenei to end the injustice of "politically motivated verdicts" against the “servants” and “revolutionary children of the nation.”

He called for reforms in institutions like the Guardians Council and the judiciary, as well as the establishment of a constitutional court, and a ban on the armed forces intervening in political and economic activities.


Ahmadinejad’s criticism of the ruling system has been widely circulated in social media, and Khamenei has not responded to any of Ahmadinejad’s comments. Meanwhile, political analysts in Iran wonder why the former president has suddenly turned on a system that supported him while he was in power.
Ahmadinejad wrote two letters after Khamenei accused him of “doing what the enemy would have done” in Iran. The letters, dated February 19th and March 13th, 2018, followed the arrest of Mashaei and another close aide, Hamid Baqaei. Ahmadinejad lambasted the judiciary over the arrests. He warned, “Every single case of injustice exercised by the government in Iran can lead to the collapse of a big empire.”