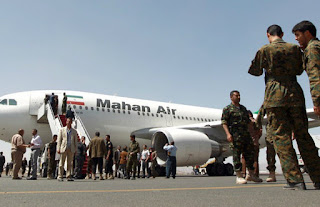 Iran Focus
London, 25 Jan - German officials have announced that an Iranian airline has been banned from all German airports. Mahan Air has been accused of using its aircraft to transport personnel and weapons to terrorists in Syria.
At the beginning of the week, the German foreign ministry said that the ban is effective immediately. The airline is the second largest Iranian carrier (after Iran Air). There were, until now, a number of regular flights between Iran and Germany.
The United States has already applied sanctions on the airline.
At the beginning of the month, the European Union announced that it had passed sanctions on Iran's security services and on two of its high-level officials. This was following their involvement in plots on European territory.
Last year, several Iranians were arrested for their involvement in a plot against members of the opposition residing in Albania. A few months later, a plot to bomb the opposition’s annual conference in Paris was foiled by authorities across Europe and Danish authorities revealed that Iran was involved in plots to assassinate Iranian dissidents in Denmark.
The National Council of Resistance of Iran (NCRI) is the main opposition to the Iranian Mullahs and it has announced that it welcomes Germany’s ban on Mahan Air flights.
However, the NCRI’s representative office in Germany has called for a complete cessation of trade and economic relations with Iran.
The European places the greatest of importance on the respect of human rights and democracy, so it is quite shocking that European officials are ignoring the rights of the Iranian people.
The people of Iran have spent almost four decades under the despotic rule of the Mullahs. They have been systematically denied the most basic of human rights and they risk their lives to make their voice heard. Countless protesters in Iran have been arrested and imprisoned, simply for exercising a right that most in Europe take for granted. Furthermore, once arrested they are horrifically treated in prison and risk execution.
It is important that the international community, especially those countries that value freedom, respect and human rights, speak out about the troubling treatment of the people of Iran. The EU is shamefully putting trade relations first.
The NCRI reminds the international community that the Iranian Intelligence agencies “exploits every opportunity that exists in Western countries for espionage, terror, technology theft, drug smuggling and other illegitimate purposes”. It also highlights that income from foreign trade is spent on the export of terrorism, the suppression of its own people and on its malign activities in the Middle East. Therefore, any EU funds are likely to be spent on such belligerence and to “bolster the mullahs' reprehensible rule”.
The opposition emphasises that the Iranian Mullahs’ dictatorship should be acknowledged and acted upon and that its agents and spies should be expelled from European soil so that the threat is controlled.
Furthermore, it recommends that the Islamic Revolutionary Guard Corps (IRGC) and Ministry of Intelligence (MOIS) are listed as the terrorist organisations that they are.