Will the Iran Nuclear Deal Survive Another Year? 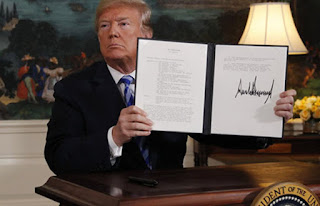 Will the Iran Nuclear Deal Survive Another Year?

Iran Focus
London, 25 Jan - The 2015 Iran nuclear deal was a great source of positivity for many when it was being signed. U.S. President Barack Obama who oversaw the negotiations promised his nation that the deal would make Iran more moderate and more of an international player than it had been. The EU saw the deal as necessary in order to contain the Iran nuclear threat. But the biggest winner of all was Iran.
Iran was able to get crippling economic sanctions lifted, opening it up to trade deals and negotiations across the world, while at the same time freeing up billions of dollars’ worth of assets that were previously frozen.
In exchange, it had to do very little. Sunset provisions that expired after a certain period of time meant that Iran just had to be a little more patient. And in the meantime it could concentrate on other areas of its malign programs that were not addressed in the deal.
Last year, U.S. President Donald Trump announced that he was exiting the nuclear deal because it was extremely flawed. He claimed that the deal guaranteed a nuclear arms race instead of eliminating the threat. He also said that Iran is the one that reaps all the benefits of the deal.
Sanctions were re-applied and Iran did not live up to its threat of exiting the nuclear deal if the United States left. It won’t leave the nuclear deal because of international pressure but it might seek to get the U.S. in other ways. The U.S. has interests in Afghanistan and Yemen and Iran could seek an opportunity there. Escalation of conflict is a real concern for the entire international community.
Trump wants the deal to be renegotiated and he wants a wider range of threats to be dealt with, including its human rights abuses and its ballistic missile program. It is highly unlikely that the Iranian regime is going to go down this route because it has understood that Trump is not open to conceding on any issues.
The Iranian Mullahs believe that they can survive until 2021, in other words get through Trump’s term in office. They have high hopes that a democrat will replace Trump and bring the United States back into the deal, lifting sanctions at the same time.
However, it is not just so easy. Trump has added non-nuclear related sanctions that will be difficult to roll back in the context of the nuclear deal. Furthermore, the United States could not just decide to re-renter the deal just because a new president is in office.
On the other hand, if Trump manages to secure a second term, the Iranian dictators will have no choice but to go to the negotiating table which eventually will also lead to their downfall.
The situation with Iran, as it stands, is precarious. The smallest of moves could lead to a major escalation of conflict that the United States, Israel and Saudi Arabia could be drawn in to.
The survival of the regime, and that of the nuclear deal, is highly uncertain.