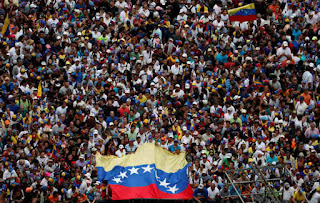 Jan. 28, 2019 - The state-run “Siasat-e Rooz” (Daily Politics) newspaper in Iran wrote a piece very vividly voicing the Iranian regime’s concerns in response to the reactions seen from the European Union and the international community in regards to developments in Venezuela.
“The actions taken by European countries in reference to Venezuela, and supporting the toppling of this country’s government, shows that these countries stand alongside the United States,” the piece published on January 27 reads in part.
“These measures once again teach us this lesson that relying on institutions such as the Financial Action Task Force (FATF), Palermo and counter terrorism financing (CFT) cannot resolve the country’s problems. These institutions were never independent and have no agenda but to go in line with the ruling state.”
This state-run daily compares the status quo of the Venezuelan regime and the mullahs’ apparatus.
“A significant issue is that the Americans have claimed they are not seeking to topple the Venezuelan government. Instead they claim to be supporting the people of this country to have better lives. Despite their claims, the Americans have also imposed widespread sanctions against Venezuela to cause chaos in their economy. A look at the Americans’ positions vis-à-vis the Islamic Republic shows they have adopted similar positions against the Islamic Republic. [U.S. President Donald] Trump and [Secretary of State Mike] Pompeo also claim to not be seeking regime change in Iran and pursue better lives for the Iranian people.”
In conclusion, the daily writes: “It is worth noting that the Americans are increasing sanctions and new pressures against the Islamic Republic with each passing day. The Americans’ actions show they continue to pursue a policy of regime change… Their actions against Venezuela is similar to when France - parallel to their claims of opening a financial channel between Europe and Iran in the near future - raises concerns about the Islamic Republic’s missile capabilities and status quo in the region, and or when the Germans and the British describe Iran as a regional threat and claim Iran must change its behavior… what does this all mean?... A more important issue is the United Nations position in regards to developments in Venezuela. A position that goes against the UN Charter and supports the pro-coup. This proves there should be no trust in this organization.”
Of course, it is obvious that the Iranian regime’s main concern is about its own future.