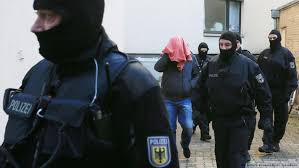 By Associated Press
January 30 at 2:33 AM
BERLIN — German news site Spiegel Online reports that police have arrested three men on suspicion of planning to carry out a bomb attack.
The site reported that the three Iraqis were arrested early Wednesday around Dithmarschen, in the northern state of Schleswig-Holstein.
A spokeswoman for Germany’s federal police, Daniela Kiss, confirmed that officers were involved in an operation together with state police, but referred to federal prosecutors for further details.
German federal prosecutors, who couldn’t immediately confirm the reports, are responsible for investigating serious crimes including terrorism.
Spiegel Online reports the men, identified as Shahin F., Hersh S. and Rauf S., wanted to use fireworks to build an explosive and had ordered a detonator from Britain.
Their surnames weren’t provided in line with German privacy rules.
Copyright 2019 The Associated Press. All rights reserved. This material may not be published, broadcast, rewritten or redistributed.
https://www.washingtonpost.com/world/europe/report-german-police-arrest-3-suspected-of-planning-attack/2019/01/30/4ecca0ec-2461-11e9-b5b4-1d18dfb7b084_story.html?noredirect=on&utm_term=.5ba7cc4a702b

January 30, 2019 / 8:58 AM / Updated 12 minutes agoGerman police arrest three Iraqis suspected of planning attack: prosecutor
BERLIN (Reuters) - German police arrested three Iraqi citizens on suspicion they were planning an Islamist-motivated attack, the federal prosecutor’s office said on Wednesday.
“According to the findings to date, the suspects had not yet selected a specific target for their attack,” the federal prosecutor’s office said in a statement.
Reporting by Michael Nienaber, editing by Tassilo Hummel
Our Standards:The Thomson Reuters Trust Principles.