Modern Death and Terrorist Fatwa? - Issued by DER SPIEGEL or by the Mullahs' "Islamic Revolutionary Court"? 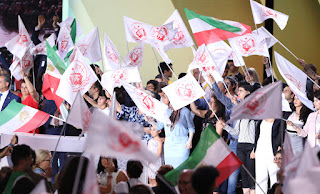 Modern Death and Terrorist Fatwa? - Issued by DER SPIEGEL or by the Mullahs' "Islamic Revolutionary Court"?

Press release - 18.02.2019
DER SPIEGEL published an article on February 16, 2019, titled "Prisoners of the Rebellion," containing a wealth of shameless lies and allegations defaming the opposition National Council of Resistance of Iran (NCRI) and the People's Mojahedin Organization of Iran (PMOI/MEK). This article is a blatant betrayal of responsible journalism, misleading rather than enlightening, defaming rather than doing justice to the truth. Grossly violating professional principles, its authors aid and abet the terrorist and religious dictatorship ruling Iran, paving the way for Iran's mullahs to legitimize and pursue terror and bloodshed against the MEK on the European soil. In 2018, the regime’s intelligence service used European countries, from France to Germany, Belgium, Denmark, Norway, Austria and Albania, to plot terror on the MEK, Europeans, and Americans by its spies and terrorists.
Amnesty International declared 2018 the "Year of Shame" for the Iranian regime, denouncing the 7,000 politically motivated arrests that occurred in Iran last year as well as condemning its ongoing crimes against humanity. The deference and adulation displayed by DER SPIEGEL to Iran's regime of injustice, teetering on the verge of collapse in the face of the Iranian people’s uprising, emanates from an appeasement mentality that puts commercial interests above universal human rights and values, and will not be forgotten by Iranians.
The correspondence that the Representative Office of the NCRI in Germany has had with DER SPIEGEL in the past ten months (May 2018 to February 2019) and in which it has answered allegations presented by the magazine with accompanying documentation, will be a thick book. There is no doubt that DER SPIEGEL has massively violated its neutrality and objectiveness obligation. Our documents show that those responsible for the latest article have deliberately lined up a plethora of crude lies against the Iranian Resistance. Indeed, "Claas Relotius" has found a worthy successor to this work in DER SPIEGEL. By publishing the said correspondence[1], we are appealing to all freedom lovers and advocates of freedom of speech in Germany to make their own judgment. Before we go into the chronology and the background of this collection of lies presented in DER SPIEGEL, we consider three comments necessary:
First, the timing of the article points to its vile goals. According to a letter from the deputy foreign editor in DER SPIEGEL, Mr. Mathieu von Rohr, the article was to be published on November 24 last year. Publication was "postponed" to a more opportune time for the Iranian regime and its appeasement partners. The Middle East conference in Warsaw and the Iranian opposition's demonstration on the occasion enraged the Iranian regime, making this "remedy" opportune. The unprecedented and enthusiastic reception of DER SPIEGEL’s article by Iranian state media best illustrates this mutual need. The official Iranian news agency IRNA reports under the headline "Shocking tale of DER SPIEGEL on psycho-torturers of MEK members in a camp in Albania". Mehr, the news agency of the mullahs’ Ministry of Intelligence and Security (MOIS), headlines: "Mujahedin train cutting throats three times a week in Albania". Headline in FARS News Agency, belonging to the Islamic Revolutionary Guards Corps (IRGC): "Members of the organization are practicing massacres". Title in Mizan news agency, belonging to the criminal justice apparatus of the mullahs: "MEK in Albania trains cutting throats with a knife, gouging eyes with bare fingers and tearing mouths open". The website of the supporters of "Velayat" (of the religious leader) has the following lead: "DER SPIEGEL's shocking report on the brutality of the MEK". Hundreds of other government media published the translation of the article into Persian under similar titles.
Second, this article primarily targeted members of the PMOI living in Albania, whose extermination in Iraq was an avowed goal of the Iranian regime, but who were able to leave Iraq safely in an organized manner, through a successful initiative by the Resistance. As you can see from the chronology documented below, the deputy foreign editor of DER SPIEGEL informed us on November 14 that the weekly intended to publish an article, so we invited them to visit the PMOI residence in Albania, but received no answer. It is shameful that here, in the absence of legal representation, without any hearing, based on medieval methods of wrongful accusation practiced by the mullahs ruling Iran, a public trial is being carried out in absentia with a death sentence issued. This is a stain on democracy and the free press in the 21st century.
The Iranian regime has already sentenced all 2,500 PMOI members now in Albania to death in absentia and they are targets of the regime’s terrorism. DER SPIEGEL’s article, however, has taken its cue from the mullahs, by condemning these people with the dirtiest allegations in absentia. This is nothing less than a fatwa to kill and assassinate them. Is this DER SPIEGEL or the Iranian so-called Revolutionary Court?
Third, the article is a politically motivated hit piece against the PMOI. It tramples on all claims of "fact checking” and objectivity. The editor-in-chief of DER SPIEGEL had apologized for the journal’s transgressions in the case of Claas Relotius in a letter on December 20, 2018:
“He [Claas Relotius] committed fraud and we allowed ourselves to be defrauded: the top editors, the section editors and the fact checkers. We were always proud of our system, which includes numerous safeguards ensuring that stories are read by many different people. Our fact checkers examine each story closely on the search for errors. Now we know that the system is flawed.”
Today, however, Der Spiegel has again failed to conduct proper fact checking and guard its objectivity in a much more serious way, endangering the lives of thousands of PMOI members who are already marked for death by a vicious regime. Der Spiegel never submitted many of these false claims to the Iranian Resistance for comment; they have not even undergone a simple online review, which cannot be coincidental.
[1] https://www.ncr-iran.org/de/

16- The NCRI representative in Germany wrote in another e-mail to the Deputy foreign editor on November 25, 2018: "Dear Mr. von Rohr, Following my letter of November 24, I inform you that the MOIS websites such as the YARAN-e IRAN, AAWA and IRAN-INTERLINK have cunningly cited a DER SPIEGEL interview with Gholamreza Shekari against the PMOI, which you can see this under the following links: "


http://www.yaraniran.com/%D8%BA%D9%85-%D8%A7%D9%86%DA%AF%DB%8C%D8%B2%D9%87-%D8%AA%D8%B1%DB%8C%D9%86-%D8%B3%D8%B1%DA%AF%D8%B0%D8%B4%D8%AA-%D8%A8%D8%B1%D8%A7%DB%8C-%D8%AC%D8%AF%D8%A7%D8%B4%D8%AF%D9%87-%DA%AF%D8%A7%D9%86-%D9%81/
http://aawa-association.com/index.php/sport/sport-news/football/5421-2018-11-24-10-14-49
http://iran-interlink.org/wordpressfa/%D8%B3%D8%B1%DA%AF%D8%B0%D8%B4%D8%AA-%D8%BA%D9%85-%D8%A7%D9%86%DA%AF%DB%8C%D8%B2-%DB%8C%DA%A9-%D8%AC%D8%AF%D8%A7%D8%B4%D8%AF%D9%87-%D8%A8%D9%87-%D9%86%D9%82%D9%84-%D8%A7%D8%B2-%D8%A7%D8%B4%D9%BE
17- SPIEGEL-online once again on January 23 took to a political debate in Spain claiming that the PMOI had provided financial support to the VOX party as an opportunity to attack the PMOI as a "sect" and "personality cult." In addition, the article said that the PMOI had only limited support in Iran and that the Iranians had "not forgotten or forgiven" their (PMOI’s) previous stay in Iraq.
18- On February 1, the representative of the National Council of Resistance of Iran wrote to DER SPIEGEL in response to these slanders:
"What the Iranian people will not forget and will not forgive are the war crimes and other crimes committed by this regime against humanity, such as for example, the massacre of political prisoners in Iran in 1988 which recalls the extermination of Jews by the Hitler regime.” The recent article obviously prefers to forget these atrocities and forgive the fascists ruling Iran. The appeasement of the mullahs at the expense of the Iranian people and their suffering, and the blood of hundreds of thousands of tortured and executed political prisoners is truly disgusting. If the institutions of the Iranian Resistance and the PMOI had not been profoundly democratic, that resistance could have never survived in the face of the brutal onslaught of repression and terrorism, as well as the conspiracy of Western powers and their false designation of the resistance as a terrorist organization. The regime may repeat its vile defamation of the POMI with labels such as personality cult, domination, anti-democratic structure, and sect as often as it wishes, but this will not stop the downfall of this regime, a process in which the PMOI is at the forefront. The process that will lead to the demise of the mullahs has begun and is irreversible."
The representative office of the National Council of Resistance of Iran calls on all conscientious individuals to judge this grave violation of impartiality of the press. Silence in the face of these inquisition-like methods, such as DER SPIEGEL shows, is tantamount to support for the religious fascism ruling Iran, which has so far executed 120,000 freedom-lovers.
Representation of the National Council of Resistance of Iran in Germany
February 18, 2019