Social Protection, Public Services, And Sustainable Infrastructure A study by the Women's Committee of the National Council of Resistance of Iran 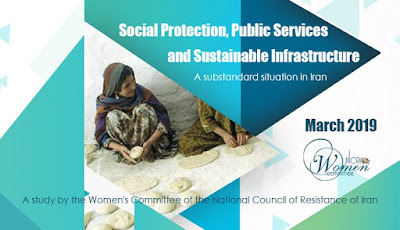 Social Protection, Public Services, and Sustainable Infrastructure; a substandard situation in Iran
A study by the Women’s Committee of the National Council of Resistance of Iran
March 2019
Download full text
The CSW63 meetings focused on three thematic areas of social protection systems, access to public services and sustainable infrastructure.
The Commission urges governments to design, fund, implement, supervise and evaluate social protection systems, public services and sustainable infrastructure in accordance with human rights standards. So that the existing services and infrastructure are affordable for everyone and acceptable to all cultures and social levels. They should not be discriminatory according to sexual norms or classified according to gender, social class or geographical location. The progress should also be continuous and should not go backward.

Iranian women and girls, however, are living under increasingly inhuman conditions under the rule of the misogynist dictators in Iran.
Most working women receive wages that are far below the poverty line. They are deprived of adequate social protection. In step with poverty going rampant, a growing number of young women are deprived of education. The official policy of privatization of hospitals have not helped the situation of Iranian women, either. There are no public medical insurances particularly for low-income and poor women. Young Iranian women are deprived of scientific opportunities due to gender-based admissions to many fields. And these are but a handful of numerous obstacles hindering empowerment of Iranian women.
The grave economic situation and deep social divisions augment Iranian women’s problems every day. In March 2018, a member of the mullahs’ parliament admitted that 80% of Iranians live below the poverty line. In fact, the ruling regime’s policies against the interests of the nation and widespread corruption of the ruling clique along with gender and social class inequality that are institutionalized in the country’s laws do not leave any source of funding for improving infrastructure, public services, and social protection to empower women and girls.
Read full text