U.S. national security advisor: Iran still in the grip of a radical theology 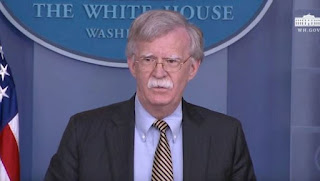 U.S. national security advisor: Iran still in the grip of a radical theology

March 12, 2019 - On March 10, in an interview with ABC News, U.S. National Security Advisor John Bolton talked about the terrorist threat of the Iranian regime and said: “For those who’ve said, for example, that the terrorist threat from Iran – those who’ve said in the years since the 1979 Islamic Revolution, 40 years now, the ideology will fade, they’ll just become normal nation again like everybody else, that hasn’t been true in Iran. They’re still in the grip of a radical theology.”
On the anniversary of the Iran nuclear deal, officially know as the JCPOA, Mr. Bolton also said: “Today is the 3rd anniversary of the horrible Iran deal that gave Tehran billions in sanctions relief but didn’t end its nuclear ambitions, missile tests, support for terrorism or regional expansionism.  Thank you, President Trump, for ending this deal & imposing maximum pressure.”

7,319 people are talking about this

Earlier in February, Mr. Bolton also sent a message commemorating the 40th anniversary of the 1979 Revolution, which overthrew the Shah regime. In a message addressed to the mullahs who rose to power after the revolution he said: “What a 40 years it has been: tyrannizing its own people and terrorizing the world. Iran continues to seek nuclear weapons to intimidate peaceful people all around the globe and ballistic missiles to use as delivery systems.”
“Iran under the Ayatollahs remains the central banker of international terrorism and its conventional military forces are all over the Middle East. In Yemen, in Iraq, in Syria,” he added.
He described the current dilemmas of the Iranian people, saying: “Perhaps worst of all, the people of Iran have suffered grievously. Right now, unemployment is at record levels, inflation is at all-time highs, the Iranian currency has gone through the floor.”
He then addressed the Iranian Supreme Leader Ali Khamenei himself and said: “So, Ayatollah Khamenei, for all your boasts, for all your threats to the life of the American president, you are responsible for terrorizing your own people and terrorizing the world as a whole.”


Referring to the 40th anniversary of the Islamic Republic of Iran, Mr. Bolton concluded his statements with remarks to Khamenei: “I don’t think you have many more anniversaries to enjoy.”