Iran: More Than One Thousand Girls and Boys 9 to 19 Years Old Registered Married 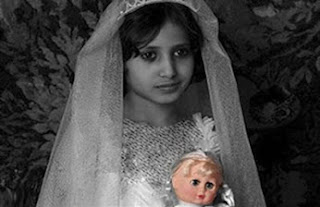 Iran: More Than One Thousand Girls and Boys 9 to 19 Years Old Registered Married

NCRI - The head of the Civil and Personal Status Registration Authority of Isfahan – Central Iran stated that more than 500 children and nearly 500 teenage boys got married this year. 55 of the brides aged also less than 10 years old.
As Tabnak news agency reported on 29th December 2016, Touraj Haj Rahimian stated in this regard that 533 girls aged less than 14 got married in Isfahan province and 55 of the brides were girls less than 10 years old. According to the figures, 26250 marriages were recorded in the registration office. 528 of the brides are aged 10 to 14 and 6540 of married girls are aged 15 to 19.
From the beginning of this year until the end of November, 499 boys aged 15-19 have got married as well. 7671 cases of divorce have been recorded in eight months of this year.
Posted by Anjoman nejatiran at 11:32 AM