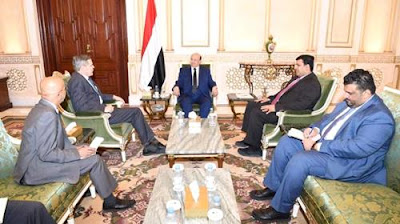 Sanaa - Asharq Al-Awsat, 29 March - The Saudi-led coalition in Yemen renewed its calls that the international community end Iran’s interferences in the region.
“The President called on the international community to press for putting an end to the Iranian interferences in the region,” President Abd-Rabbu Mansour Hadi was quoted as saying by the Yemeni news agency, Saba.
Hadi’s calls came during a meeting with US ambassador to Yemen Matthew Tuller in Riyadh Wednesday, as part of western diplomatic efforts to prepare the grounds for kicking off a new round of peace talks between the legitimate government in Yemen and Houthi rebels.
During their meeting, Hadi and Tuller discussed the Yemeni-US bilateral ties and cooperation between the two sides.
Hadi praised the good offices made by the ambassador in order to achieve the durable peace in Yemen in line with his nation's support for Yemen and its constitutional legitimacy.
The President also reaffirmed the legitimate government support for these efforts aiming to bring about the sustainable peace that is based on the GCC's Initiative, its operational plan, outcomes of the National Dialogue and International resolutions in relevant on top of all resolution 2216.
The President spoke about the challenges Yemen has been facing in light of the continuous attacks launched by Iranian-backed militias on the Yemeni people and neighboring countries.
He described the recent missile attacks on the Saudi capital and other cities as “criminal.”
Meanwhile, Hadi hailed the significant efforts exerted by the US alongside Yemen in fighting terrorism, contributing to relief actions and standing by the constitutional legitimacy, as well as pushing for making peace.
Official sources said the US diplomat cheered the legitimate government's positive response to peace options; reaffirming his administration's support for Yemen and its legal leadership headed by President Hadi.
Meanwhile, the family of former Yemeni President Ali Abdullah Saleh condemned the missile attacks launched from Yemen targeting residential areas of Riyadh and other cities in Saudi Arabia on Sunday, according to a statement posted on a website linked to Saleh’s family.