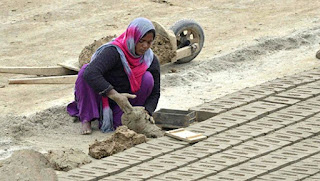 30 April 2018-- The international community is beginning to welcome Labor Day as an opportunity to improve workers’ conditions across the globe. In Iran, however, the story is far different.
Statistics tell one side of the story:

These are only a small percentage of the resulting catastrophe when a country is ruled by the mullahs’ regime for four decades.
When a government renders such an outcome through its political, social, construction and cultural “management,” only God knows what its very reactionary perspective delivers vis-à-vis women – which of course belongs to the Middle Ages.
The main pressure of all those unbelievable numbers will be on the women of each and every family. More and more women in Iran are entering the workforce in order to help their families make ends meet.
“Some female workers are seen in sewing workshops working for 14 hours straight… Half of the workers in brick factories are women and they are in very harsh conditions,” according to Iran’s semi-official ILNA news agency.

Other Iranian and non-Iranian news agencies and outlets report further atrocities:
- “Throughout Iran’s history, female workers have been forced to endure very harsh conditions.”
- Iran’s House of Labor Secretary-General Alireza Mahjoub said, “Unemployment among women workers has doubled in the past two years.”
- Shahrvand daily wrote: “80 percent of Iran’s uninsured workers are women,” adding “Female college graduates are receiving below minimum wage standards and having no insurance pensions.”
“There are women earning only 1.5 million rials a month ($35).”
Despite all this, the Iranian woman’s 40-year struggle against the mullahs’ regime has never stopped. Women are specifically seen leading the charge in the recent uproar of protests across the country. This trend will most definitely increase and provide even more troubles for the ruling mullahs.