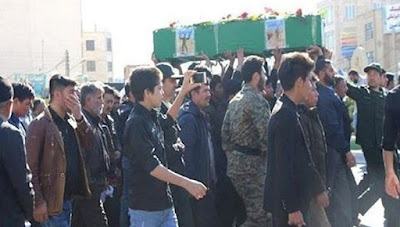 
PMOI/MEK, April, 30,2018-- Bases linked to Syrian army and Iranian forces stationed in the cities of Hama and Aleppo have been targeted in a rocket/missile attack staged at 10:30 pm Sunday night local time, according to various news outlets.
Syrian TV is reporting several explosions have been heard near Hama and Aleppo.
Forces linked to the Iranian regime and Assad’s military near the Nairab military airport & the Aleppo Int'l Airport, east of the city have also been targeted.
The hardline Asr-e Iran website reported that a rocket/missiles strike left 40 killed and 60 others wounded. It is said 18 Iranians have been killed.Other Iranian websites and news agencies also reported the strike, but most of them including Iranian Student News Agency, ISNA, and Asr-e Iran retracted only the number of Iranian mercenaries killed in this attack, fearing demoralization amongst regime forces.
Sunday night Al Akhbariya TV reported the sounds of a series of explosions heard near Hama and military officials are investigating the cause.
Al Hadath TV (Saudi Arabia) also ran breaking news citing the Syrian Human Rights Observatory saying this rocket attack near Hama targeted positions linked to the Syrian army and “Iranian advisors” in a base linked to the 47th Division.
Sky News TV is citing various sources saying these attacks have left 38 people killed. Other sources have yet to verify these numbers.
ISNA news agency reported citing local sources and activists saying 18 Iranian forces are left killed and dozens of others, including a senior military commander and official linked to the “Hayan Talal Mohammad” center, are injured after rockets and missiles targeted their center located in the town of Salhab and the village of Nahr Al Bard west of Hama.