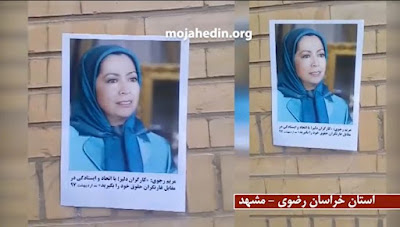 Tehran, PMOI, April 27, 2018 - Activists and supporters of the PMOI/MEK used the occasion of the International Labor Day to promote the ideas and actions of the PMOI by posting Maryam Rajavi's pictures and slogans throughout the citied in Iran.
Here are some of the activities of the PMOI/MEK supporters inside Iran during past couple of days.

In the City of Ahwaz, activists post Maryam Rajavi and Masoud Rajavi's pictures as the leaders of the Iranian Resistance.