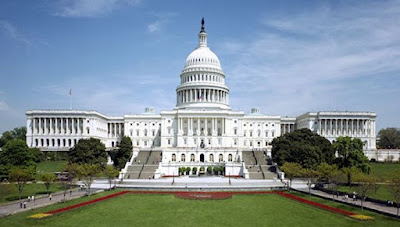 28 April 2018-- The U.S. House of Representatives has adopted the “Iran Human Rights and Hostage-Taking Accountability Act” with an overwhelming majority of 410 votes in favor and only two votes against. This bipartisan bill considers Iranian regime officials accountable for their role in human rights violations and hostage-takings and takes measures to impose sanctions. This bill also condemns the 1988 massacre of over 30,000 political prisoners, mostly members, and supporters of the Iranian opposition People's Mojahedin Organization of Iran (PMOI/MEK).
The bill calls on the U.S. government to place sanctions on Iranian officials involved in a variety of specific measures against the U.S. or Iranian citizens.
Individuals involved in human rights violations, censorship or financial corruption will be sanctioned under this bill. These individuals will be banned from receiving visas, and their belongings and assets will be confiscated.
This bill will most likely not face any obstacles in the Senate and thus be signed into law by U.S. President Donald Trump. Under this bill, the President will have a maximum of 270 days to report to Congress on Iranian regime officials involved in human rights violations under this & previous laws.
Another article of this bill accuses Iran of taking U.S. citizens hostage and arbitrarily arresting them. The bill calls on the U.S. Secretary of State to represent a report in a maximum of 120 days on U.S. strategy aimed at preventing Iranian measures in this regard.
Following the 2017/2018 uprising, the U.S. House of Representatives in a near-unanimous vote passed Resolution 676 and expressed their support for the Iranian people’s revolt against a repressive regime.
For the first time, the U.S. government has been obliged to evaluate the 1988 massacre in Iran.
This bill also emphasizes all of Iran’s human rights violations, anytime and anywhere, will be subject to evaluation.
This bill is passed as the political-social situation in Iran is very hectic. The recent uprising has opened the eyes of many across the globe, sending the message that a majority of Iranians seek this regime’s overthrow.
Developments outside of Iran’s borders are also rendering increasing isolation for Tehran. With only two weeks left to Trump’s May 12th deadline for the Iran nuclear deal, we are witnessing a new velocity in political developments playing against Tehran’s interests.
The recent human rights condemnations and sanctions, in line with a very possible return of pre-JCPOA sanctions, and increasing scrutiny over Iran’s ballistic missile program and foreign meddling, are making the road ahead very, very difficult for the mullahs’ regime.