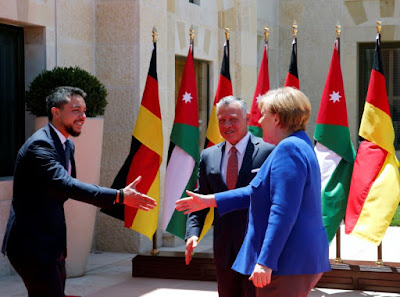 By INU Staff
INU - German Chancellor Angela Merkel has called on her fellow European leaders to act "urgently" to counter Iran’s "aggressive" activities in the Middle East, following a meeting in Amman with King Abdullah of Jordan.
Merkel said on Thursday, June 21: "Iran's aggressive tendencies must not only be discussed, but rather we need solutions urgently."
She then said that although European countries wanted to keep the 2015 nuclear accord with Iran alive, they remain concerned about Iran’s ballistic missile programme, support for the Houthis in Yemen, and its propping up of the Syrian Regime.
Merkel is right to be concerned about these things. Iran poses a threat to its own people, through egregious human rights abuses, the Middle East and the world, through its interference in other nation-states, support of terrorism, and malign missile programmes.
Germany should take a strong stance against the Iranian Regime by withdrawing from the nuclear deal, reinstituting sanctions on the mullahs, and sending a delegation to the Free Iran gathering in Paris on June 30.
Nuclear Deal
Donald Trump pulled the US out of the nuclear deal between Iran and six world powers back in May.
The deal, also known as the Joint Comprehensive Plan of Action (JCPOA), was designed to give Iran sanctions relief in exchange for curbs on its nuclear programme, but Trump announced that Iran had violated the deal on numerous occasions and also cited problems with the terms of the deal, which failed to address the Regime’s testing of ballistic missiles and support for terrorist groups.
So far, Germany and the rest of the signatories (the UK, France, China, and Russia) have remained in the deal and are trying to salvage it from their end, mainly seeking sanctions waivers for their businesses. They haven’t yet managed that.
Jordan
Merkel has also expressed support for Jordanian concerns about Iranian activity near its border with Syria, where the mullahs have many proxy militias fighting to keep Bashar Assad in power.
She said: "You live not just with the Syria conflict, but also we see Iran's activities with regard to Israel's security and with regard to Jordan's border."
King Abdullah will meet Trump in Washington on June 25.
The White House issued a statement that read: "President Trump looks forward to reaffirming the strong bonds of friendship between the United States and Jordan. The leaders will discuss issues of mutual concern, including terrorism, the threat from Iran, and the crisis in Syria, and working towards a lasting peace between Israelis and Palestinians."