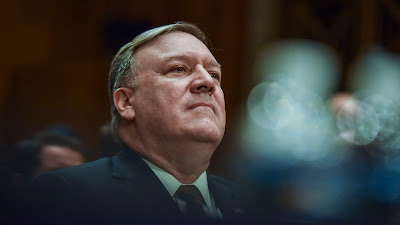 By INU Staff
INU - US Secretary of State Mike Pompeo made a tweet thread this week to describe the ongoing Iranian uprising and explain the reasons behind it.
On Wednesday, Pompeo tweeted that protests are growing in Iran and asked what could be the reason. This was a rhetorical question, as Pompeo answered it in his next tweet, blaming Iran’s failing economy and high unemployment.
Pompeo didn’t address the reasons for the lousy economy, but it’s down to decades of mismanagement and corruption by the Regime. This is important as the Trump administration seek to put more pressure on the Iranian Regime by reimposing tough sanctions.
These sanctions will make it easier for the Iranian people to rise up against the mullahs and bring regime change, which is the wish of the people. And why would the people of Iran seek regime change? Well that was explained in Pompeo’s Thursday tweets.
He tweeted: “5,000 Iranians arrested in January’s protests. 30 women jailed for protesting the hijab. Hundreds of Sufi dervishes, dozens of environmentalists, 400 Ahwazis, 30 Isfahan farmers— all imprisoned by Iran’s criminal regime. Iranian people deserve respect for their human rights.”
It’s not hard to see why the people of Iran, and their organised opposition, would call for regime change and even host a gathering in Paris on June 30 about that very topic.
Pompeo then turned his attention to Iran’s suppressive and terrorist forces, who are funded with money stolen from the impoverished Iranian people, and are the main force for repression in Iran.
State Department Spokesperson Heather Nauert said on Thursday that the US saw “the frustration that regular Iranians feel and are expressing” and that Pompeo had simply been addressing that issue.
When asked if the US was promoting regime change, she explained that he sought to change the regime’s behaviour, but as we can see for 40 years of appeasement, this will not work.
The Trump administration has largely sought to end this policy and there are many in the White House who have previously expressed their support for regime change.