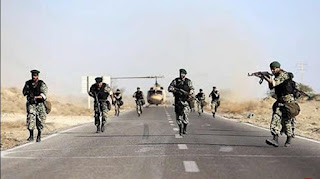 INU - Iran has supported Syrian President Bashar Assad mostly via proxies and allied militias. The Lebanese group Hezbollah has contributed thousands of men to fight in Syria. Foreign fighters from Afghanistan have also gone into Syria. Phillip Smyth, Soref fellow at the Washington Institute for Near East Policy, termed this the “Shia Jihad” in his report, “The Shiite Jihad and Its Regional Effects.”
These groups are essential to the Assad regime’s war effort’s survival. Hezbollah units secured the regime’s control of Damascus and the surrounding areas.
Iran-linked militias are necessary to Assad. Meanwhile, his enemies, primarily Israel, worry about their proliferation. Israeli politicians are concerned about Hezbollah’s increasing dominance of Lebanon. They do not want a base to be established by Iranian proxies near the Golan Heights, which is the Syrian border area that Israel has occupied since 1967.
Hezbollah targets inside Syria, including supply routes and encampments, are repeatedly attacked by Israel. Islamic Revolutionary Guard Corps (IRGC)-linked groups fired missiles across the Syrian border into northern Israel, and Israel responded with air strikes on May 10th, that hit more than 70 targets in less than four hours.
Now, Syrian rebel sources claim that Iran-linked militias are wearing Syrian government troops uniforms to avoid Israeli attacks. Although not yet confirmed, these reports suggest great cooperation between foreign militias and the regime’s military.
Analyst Ryan O’Farrell is skeptical of the reports, saying, “Iran and its various foreign proxies have been very open about their intentions to open a new front against Israel along the Golan if a new war breaks out and Israeli strikes on Iranian targets in Syria have massively accelerated despite Russia’s intensive efforts to negotiate some sort of deal with Israel.” O’Farrell added, “If these reports of IRGC reflagging as Syrian to skirt Russia’s promise of [Iranian] withdrawal to Israel are true, then I think it’s in order to maintain the kind of intelligence and operational benefits that proximity to Israel would offer in a future war.”
Senior fellow at the Tahrir Institute for Middle East policy, Hassan Hassan, said, “The south-west, from east of Sweida near al-Tanf all the way to the Israeli border, was supposed to be a zone free of Iranian forces. Russia made it clear it was able to deliver on a form of that zone but it has not always been successful, except when Iran wanted to play along.” Hassan continued, “Recently Iran sent troops from Damascus to Daraa, apparently without going through the Syrian and Russian governments.”
Smyth, commented about his report via e-mail, “It’s impossible to tell how extensive reflagging would be, though it’s not unheard of during a war where many fighters don’t even wear uniforms. Additionally, more covert Hezbollah units had dressed in Syrian Arab Army fatigues early in the conflict, so it’s not out of the realm of possibility that this could happen again as a means to cover their tracks,” he said.
Shia militias embedded in regime units, “don[ning] regime military outfits to avoid Israeli attack is logical,” according to Tony Badran, a research fellow at the Foundation for Defense of Democracies. “The Israelis spoke, for instance, about concerns about the fifth regiment, [which has] Shia militias embedded into it,” Badran said.
Smyth added, “Given the current move in southern Syria targets Iran-controlled proxies and the IRGC, I’d assume any of the fighters reflagging would belong to those groups, particularly Lebanese Hezbollah.”
If these reports are true, Iran-linked militias will attempt to maintain a presence in southern Syria, their intention being to challenge Israel. Smyth explained, “I’m of the belief that no matter how a member of an Iran-controlled militia group is dressed, they will, over time, find a way to get back to sections of the Golan that they want to maintain positions in.”