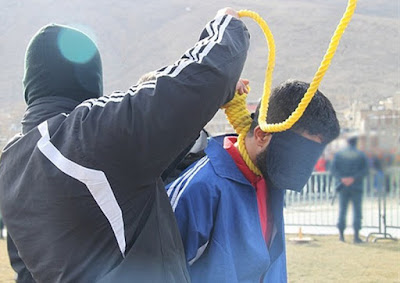 on 23 November 2018.
By Staff Writer
Iran is the world leader in terms of execution per capita and execution of juveniles, but especially frequent are the public hangings of political, ethnic and religious prisoners from a construction crane.
Recently, they have increased their execution rates in response to widespread domestic protests, international pressure and returning US sanctions, which all mean that the mullahs are losing control and facing an economic crisis, brought on by decades of mismanagement and corruption, which has seen the currency dropped 70% against the dollar and led to inflation.
The latest example was the execution of Vahid Mazloumin, also known as the “Sultan of Coins”, a gold dealer who was accused by Iranian authorities of contributing to dramatic price rises by hoarding gold, which was a warning to Iranian merchants and businesses against undermining the Iranian Regime’s policies. He was sentenced to death in October, while his assistant, Mohammad Esmail Qassemi, was hanged last week on similar charges.
According to the state-run Fars news agency, Mazloumin didn’t hold a permit to trade gold and foreign currency and had created the largest illegal network in his area, amassing about 2 tons of gold coins and instructing his team to corner the gold coin market to resell at higher prices. Now, we don’t know how much of the Regime accusations are correct, but what we do know is that these sort of crimes should not carry the death sentence. In fact, it’s a violation of international law.
The real reason that the Regime has targeted these men and other people accused of “disrupting the economy” is not to punish those responsible for the crisis – that is the fault of the mullahs – but to scare the public into submission and present the false message that everything is fine.
Just last week, 130 illegal currency traders were arrested in large-scale raids by the security forces and they may well receive the same treatment, which is to peg vague national security charges onto economic trials, according to the Independent.
Mazloumin’s trial and subsequent execution received harsh criticism from human rights groups who have long pointed out that Iran uses “kangaroo trials” to imprison large numbers of Iranians and dual-nationals, with Amnesty Internation calling the trial “grossly unfair”.
Hadi Ghaemi, executive director of the Center for Human Rights in Iran, said: “Iran’s hanging of people who have been convicted in courts without a fair trial is a blatant violation of the law.”
One group that has remained surprisingly silent though is the Iran Lobby, who supposedly advocate on behalf of the Iranian people, but really just promote the Regime’s view.
Laura Carnahan wrote: “What is notable with these new executions was the silence coming from the Iran lobby, especially groups such as the National Iranian American Council which ostensibly is supposed to advocate for the better treatment of Iranians. It’s too bad that doesn’t seem to apply to those who actions undermine the regime’s efforts to stay in power.”